The Duke of Druce 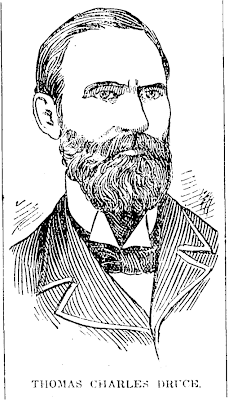 One of the strangest and most complicated court proceedings of the late Victorian/early Edwardian era centered around a formerly inconspicuous man named Thomas Charles Druce. He was a London tradesman, to be sure, but was he secretly a massively wealthy Duke, as well?

In 1820, Druce, who was then a draper’s assistant, deserted his wife of four years and their two young children, Frances and George. Fifteen years later, he reemerges into history as a salesman in the Baker Street Bazaar. He had also acquired a common-law wife named Annie May Berkeley.

Druce prospered in his new existence, eventually becoming sole owner of the store where he worked. His legal wife died in 1851, leaving him free to marry Annie May. The couple had a son, Herbert, and four months after their wedding, welcomed their second child, Walter. Druce died in 1864. Or so everyone assumed.

Walter Druce passed away in 1880, leaving behind two children and a widow, Anna Maria, who would become the great figure in our story. Calling Anna Maria Druce a troublemaker would be rather like describing the explosion of Vesuvius in 79 AD as a minor hiccup. The trouble began when she did a bit of digging into the family history and discovered the date of the marriage between Thomas Druce and Annie May, revealing that her late husband’s elder brother Herbert was illegitimate. She never realized that her father-in-law had been married before, with legitimate descendants. Quite a lot of bother would have been spared to a great many people if she had.

Anna Maria began to plot. She figured that if she could overturn Thomas Druce’s will, the illegitimate Herbert could be disinherited, leaving her and her children as sole heirs. In 1898, she went to court to have Thomas Druce’s coffin exhumed. Why? Because, she declared, the old man did not really die in 1864. Rather, Herbert Druce concocted an evil plan to take charge of his father’s estate by having Thomas imprisoned in an insane asylum, where he secretly died nearly twenty years later. 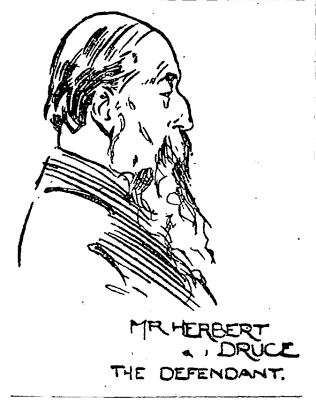 The court, for reasons that frankly escape me, found her story convincing and agreed to her wishes. Herbert Druce, however, had the exhumation stopped. Anna Maria was able to convince many onlookers that this merely confirmed the worst about him. She retaliated for this setback by going to the press. She gave her story to “Lloyd’s Weekly News.” And what a story it was. Thomas Charles Druce, she revealed, was actually the fifth Duke of Portland, who officially died in 1879. The Duke was an eccentric, but harmless figure—he dressed strangely, shunned society, and spent an enormous amount of money building tunnels and subterranean rooms around his family seat, Welbeck Abbey.

According to Anna Maria, the nobleman would periodically tire of life as the Duke of Portland, and when these moods came upon him, he would don a false beard, enter a tunnel built under his London townhouse, and reemerge in Baker Street as that man of business Thomas Charles Druce. When the charms of being a salesman began to pall, he would reverse the process and re-Duke himself. The marriage of 1851 was not between Thomas Druce and humble Annie May, but between the Duke and an illegitimate daughter of the Earl of Berkeley. Eventually, there was a mock burial of “Thomas Charles Druce,” after which the Duke retreated completely out of sight until his death. In short, Anna Maria and her children were not just sole heirs to the Druce estate, but to the Dukedom of Portland as well.

The newspaper-reading public ate the story up. It is unknown how Anna Maria came to link Druce to the Duke of Portland, or if she actually believed any of her own colorful drivellings, but she managed to convince an astounding number of people that she and her children were victims of a cruel injustice.

The avenging Widow Druce took advantage of the publicity to get another court order to exhume Thomas Druce’s grave. Again, Herbert Druce—who was rapidly becoming London’s favorite villain—thwarted her. After three years, this indomitable lady made another attempt to have Thomas Druce’s will overturned. At this point, a new figure entered the case—an Australian named George Hollamby Druce.  He was the child of the son Thomas Druce had from his first marriage.  Anna Maria had had no idea this interloper even existed, and he proved to be the fatal roadblock to her schemes. GH Druce, it seems, also wanted the will revoked. If Anna Maria’s tales of masquerading noblemen and empty coffins proved to be true, George Hollamby—not Anna Maria—would be heir to the Portland/Druce fortunes.

Anna Maria did not take this development well, castigating the Australian as an “impudent, audacious, and absolutely ignorant impostor.” He was, she snorted, no relation to the Duke of Portland Druce.

At the hearing to decide the will’s validity, she committed perjury like a champion. She asserted—under oath—that she had seen her father-in-law ten years after he officially died. However, the testimony of doctors and nurses who had attended Thomas Druce in his last illness, as well as Herbert Druce’s sworn statement describing seeing his father in his coffin, had more weight with the jury. The will was upheld, and Anna Maria dropped out of our story. In what is probably the least surprising detail about the whole saga, she was last heard from in a lunatic asylum.

However, George Hollamby was more than ready to take up her dropped baton. He published pamphlets asserting the truth of Anna Maria’s story. And he hired a lawyer, who helped him establish a company that sold “shares” for one pound each. Everyone who chipped in would, George Hollamby promised, be eligible for a portion of the joint Portland/Druce estate. It is depressing to report that these shares sold quite well--largely to people who had very little money to spare--earning the ambitious George Hollamby a great deal of money.

In 1907, George Hollamby filed suit against Herbert for perjury, asserting that Herbert’s story of seeing his father dead was a shameless lie. George Hollamby brought a strange parade of witnesses into court, all of them giving first-hand testimony that Thomas Druce was indeed the Duke of Portland in disguise. (My favorite story was the reminiscence of seeing Druce/Portland portraying the Grandmother in “Little Red Riding Hood” in a play staged at Charles Dickens’ house.)

By this time, the court decided that the only way to be rid of this endless parade of Druces was to just go ahead and open the damn grave already. Herbert Druce, who was wearier of the matter than anyone, agreed.

Great Britain held its breath in anticipation. What would this most hotly-debated of coffins reveal? It proved to reveal…a very well-preserved, and quite recognizable, Thomas Charles Druce.

I have no idea what became of George Hollamby after this debacle. I presume he had a very uncomfortable meeting with his company’s stockholders, and then quickly skedaddled back to Australia. His witnesses fared even worse—the whole lot of them faced perjury charges. And to this day, the Druce case still stands as one of the leading examples of what one of the Magistrates called “striking proof of the unfathomable depths of human credulity.”