While bizarre murders, sinister disappearances, mysterious deaths, hangings, decapitations, poltergeists, psychic assassins, and demonic garden hoses are all great good fun, I admit to being a hopeless sucker for this kind of story. 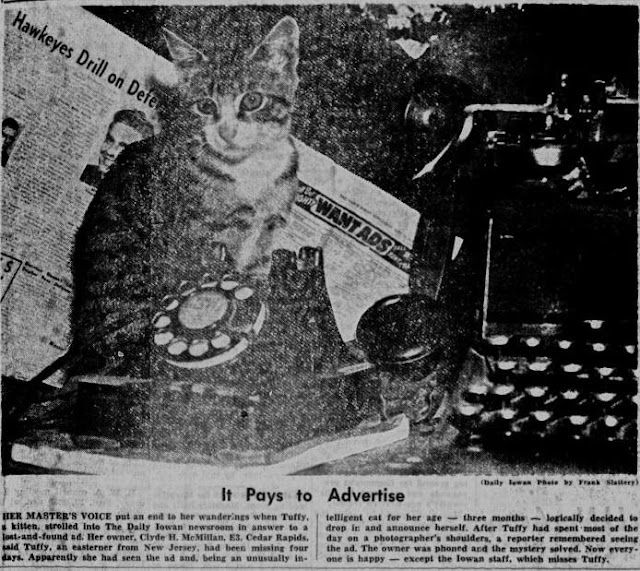 Meet three-month old Tuffy.  In 1950, the former New Jerseyite disappeared from her new home in Cedar Rapids, Iowa.  Her owner, Clyde McMillan, put a lost-and-found ad in the "Daily Iowan."  Four days after she vanished, the kitten read the ad and strolled into the paper's newsroom.  After Tuffy spent most of the day sitting on a photographer's shoulders, a reporter remembered the notice and--people not being nearly as quick on the uptake as cats--two and two were finally put together.  Tuffy and Clyde were reunited, and, as the caption above stated, "Now everyone is happy--except the Iowan staff, which misses Tuffy."

Here's hoping Tuffy went on to have a long and blissful life spent very close to home.

[A postscript:  Just before going to press, so to speak, with this post, I discovered this sequel to the story dated from about a year after the above clipping.  Tuffy became a superstar!]