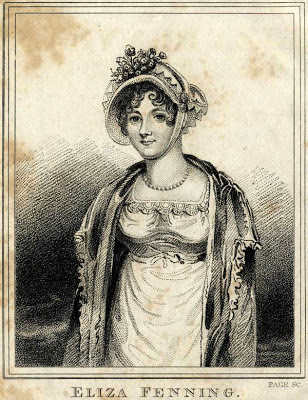 Crime historians still cannot agree whether twenty-two year old Elizabeth “Eliza” Fenning was the most incompetent of poisoners or the unluckiest of cooks. She worked for the family of Robert Turner, a London law-stationer (a seller of articles used by lawyers.) Besides Turner and his wife, the household consisted of two apprentices, Roger Gadsden and Thomas King, a housemaid named Sarah Peer, and Fenning.

By the date that was to become so crucial to Fenning’s history, she had been working for the Turners for about a month and a half. There was only one recorded instance of unpleasantness during her employ. According to Mrs. Turner, three weeks after Fenning’s arrival, she had been caught one night entering the bedroom of the apprentices. The next morning, she was threatened with dismissal, but after showing the proper contrition—Fenning claimed she had only been fetching a candle—Mrs. Turner relented. This proved to be an unfortunate decision. Certainly, Fenning would have preferred unemployment to what would take place about a month later.

On March 21, 1815, Fenning prepared dinner--a beef pie for the servants and steak accompanied by yeast dumplings for the Turners. (It was recorded that Mrs. Turner ordered Fenning not to leave the kitchen after the dumplings were made—a very curious demand that was never explained.) Although Fenning was normally a fine cook, it was noted at the dinner-table that the dumplings looked “black and heavy,” but the Turners and their guest, Robert’s father Orlibar, ate them anyway.

This was a grave mistake. The Turners almost immediately began experiencing all the violent, crippling agonies typical of poisoning. Most importantly, Fenning, who, after the remaining dumplings had been returned downstairs, had eaten as many of them as anyone, soon became dreadfully ill as well. The apprentice Roger Gadsden later testified that Fenning had warned him the dumplings were “cold and heavy,” and “would do him no good,” but he ate a small piece of one anyway. He too subsequently felt unwell, but not as badly as the others. The only members of the household to escape were Sarah Peer and Thomas King, who evidently had a providential aversion to dumplings. The household had a rough day or two, but everyone pulled through with no permanent damage done.

Except, of course, to the cook. Fenning, the creator of those “devilish dumplings,” immediately became the prime suspect, although it would be unusual indeed for a mass poisoner to be egalitarian enough to deliberately take a dose herself. The next day, Gadsden, prowling about in the kitchen, discovered a white power in the pan where the dumplings had been mixed. It was pointed out to the authorities that two packages of arsenic—clearly labeled as such—were kept in an easily accessible drawer. One of these packages, Gadsden claimed, disappeared about two weeks before the fatal dinner. (If this was the case, it is curious that no previous interest was taken in the theft.)

That was enough for the authorities. Fenning was taken into custody. She vigorously denied any wrongdoing, and blamed everyone’s illness on the milk Peer had fetched to make the dumplings. (Fenning and Peer apparently did not get on very well—a fact that may or may not be significant.) She later added that the yeast she used had a strangely-colored sediment at the bottom. It was never chemically established that the food had contained arsenic, or if it did, that the poison came from Turner’s supply, but those were the assumptions everyone accepted. (Incidentally, it was later demonstrated that the presence of arsenic in the dough would not inhibit it from rising normally. The reason why the dumplings were so unappetizingly “black and heavy” is unknown.)

At Fenning’s trial, the prosecution claimed her motive for attempting to slaughter the entire Turner family was a lingering bitterness over the scolding Mrs. Turner had given her a month before. Supposedly, she nursed her deadly wrath for weeks, and then included herself in the punishment. (She only fell ill after the Turners had collapsed, and also after she had advised Gadsden against the dumplings. This had led to the theory that after seeing the results of her handiwork, Fenning deliberately poisoned herself—either to throw off suspicion, or an attempt at suicide, fueled by fear or remorse.)

Fenning denied that she held a grudge over the incident. She declared “I like my place very much—I have never been more comfortably off since I have been out to service.” She said that the trouble with her mistress arose when Gadsden, against her wishes, “behaved improper to me,” and Mrs. Turner came to unjust conclusions. Fenning had been ready to leave her position, but Orlibar Turner’s wife (“the old lady”) smoothed things over, and as far as Fenning was concerned, the dispute was resolved. The defense called a number of witnesses who all testified that Fenning was a hard-working, good-natured girl with an excellent character. It was also made plain that she was not the only one in the kitchen on the day the dumplings were made. Peer, the apprentices, and even Mrs. Turner were in and out of the room. In short, anyone in the household could have slipped a little something extra into Fenning’s cooking.

Fenning begged that Thomas King be called to the stand, as he would attest that she never went near the drawer where the arsenic was kept. For whatever reason, her wishes were ignored. Instead, Gadsden was brought to testify. He declared that he had seen Fenning go to the drawer many times. He was not asked about the incident between him and Fenning that started the trouble with Mrs. Turner. The unfortunate cook continued to protest that King should be questioned, but the judge—who was blatantly prejudiced against Fenning--brushed off her pleas, stating that it was too late to bring the apprentice forward. Even more amazing is the fact that Dr. Ogilvy, the man who treated the household—including Fenning—during their illnesses never gave testimony. (According to the laws then in place, Fenning herself was barred from taking the stand.)

At the end of her trial, the jury only took a few minutes to find her guilty, and she was sentenced to death. The accused “was carried from the bar convulsed with agony and uttering frightful screams.”

It was widely believed that justice had not been done in the case, and Fenning quickly became a public cause. The press came to her defense, and petitions were addressed to the Home Secretary, the Lord Chancellor, and the Prince Regent, asking for a delay in the execution until everyone was satisfied that all the facts had been uncovered.

The Lord Chancellor considered the matter, but finally decided that there was insufficient justification for a reprieve. On July 26, 1815, (some sources say June 26,) Eliza Fenning was hanged. Her last words were declarations of her innocence. Her father reclaimed her body—after paying the hangman’s fee—and she lay in state at the Fenning home for five days, to accommodate the stream of well-wishers and the morbidly curious who trooped through the residence. The crowds became so large that the police finally stepped in and closed the show. Thousands of mourners joined the funeral procession.

Eliza Fenning, if innocent, managed to get a certain posthumous revenge against the Turners. That family became exceedingly unpopular after her hanging. For days, the Turner home was surrounded by an angry mob who had to be prevented from setting fire to the place. There were rumors that Gadsden was the real poisoner, but the most credible suspicions fell on none other than Robert Turner. Shortly before Fenning’s execution, a local chemist named Gibson went to the Sheriff and testified that the previous September Turner had called on him in a “wild and deranged state.” Robert’s father was sent for, and in the meantime, Gibson declared, the younger Turner “used the most violent and incoherent expressions: such as, ‘My dear Gibson, do, for God’s sake get me secured or confined, for if I am at liberty I shall do some mischief; I shall destroy myself and my wife. I must and shall do it unless all means of destruction are removed out of my way; therefore do, my good friend, have me put under some restraint. Something from above tells me I must do it, and unless I am prevented I certainly shall do it.” Other sources state that Robert Turner was prone to “fits,” and an apothecary claimed that shortly before the poisonings, Turner had attempted to purchase arsenic in his shop. As the customer showed “symptoms of insanity,” the sale was refused.

Gibson’s statement was sent to the judge in Fenning’s case, but he showed his usual antipathy to anything in the prisoner’s favor, and the chemist was ignored.

Stories about Turner’s guilt persisted, but historians have been unable to determine their validity. The question of the true culpability of Fenning herself continued to be argued for years afterwards, with “fresh evidence” sometimes presenting her as a martyred angel who fell victim to conspiracy and cover-up, sometimes as the most depraved of evildoers. It all threw off the proverbial heat, but little light. Fenning may even have inspired an incident in a classic novel published three years after her death. Mary Shelley’s “Frankenstein” features a young servant girl who was executed for a crime actually committed by Dr. Frankenstein’s monster. Many believe the character of Justine Moritz was based on the ill-fated cook.

In short, the evidence—most of it amounting to mere gossip—that was put forward about the Fenning case before and after her execution was so uncertain, subjective, and contradictory that it is impossible to know what really happened in the Turner house that March day. It is even remotely conceivable, as one modern historian suggested, that the household fell victim to accidental food poisoning, which was all too common in those unhygienic days. (There was, after all, some reason having nothing to do with arsenic to explain the strange appearance of the dumplings.) The one certainty is that whether Fenning was guilty or not, the charges against her received an appallingly poor investigation.