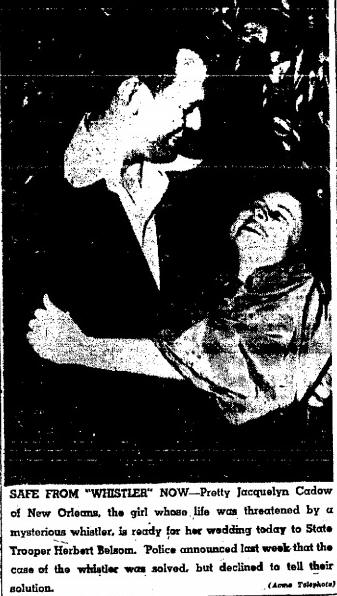 In 1950, Paradis, Louisiana resident Jacquelyn Cadow prepared for her wedding under highly unusual circumstances, described in the article below:

This little bayou community bustled with excitement today watching for a phantom whistler whose weird serenades have terrorized an 18-year-old bride-to-be.

Nearly all of the village’s 200 population peered out of windows last night while a cordon of sheriff’s deputies guarded the home of Jacquelyn Cadow.

For the past few days the townspeople have talked of little except the intruder who threatened the girl’s life and vowed to prevent her marriage to a young State trooper. Opinion is divided over whether the nocturnal whistler is a prankster, a would-be killer or a lunatic.

His whistle is a shrill interpretation of a funeral dirge.

State police, who were drawn into the investigation by State Trooper Herbert Belsom of New Orleans, Jacquelyn’s husband-to-be, said they were stepping out of the case.

“We are convinced it is the work of a prankster,” Trooper Vincent B. Ebeler said.

State Police Sgt. N.J. Khoury said the Cadow home yesterday took on the appearance of a mecca. Hundreds of curiosity seekers in automobiles paused for a look at the scene of the whistler’s visits—a cottage surrounded by moss-draped oaks.

A doctor attended the young bride-to-be who collapsed Tuesday night after she and her mother, her mother’s sister and a New Orleans States reporter all said they twice heard the intruder’s funeral whistle.

The reporter, Roy Heinecke, joined Trooper Belsom in a search of the Cadow yard, but found nothing.

“The family doesn’t seem to have any enemies,” said Sheriff Leon Vial. “It is either a crazy person or someone close to the family who has something against them that we don’t know about.”

The girl’s mother, Mrs. Clifford Cadow, said it started with whistled wolfcalls last February. Two months ago, when Jacquelyn’s engagement to the 25-year-old trooper was announced, the mother said she received telephone threats.

“I’ll kill her. I’ll stick a knife in her. Your daughter will never marry Herbert,” Mrs. Cadow quoted the caller.

The wedding is set for Oct. 1.

“I’ll marry Herbert if police have to escort me up the aisle,” said Jacquelyn.


Jacquelyn married Belsom without incident, and there is no record of the “Whistler” ever appearing again. The mystery of who was harassing Cadow and why has never been publicly resolved. The Sheriff later announced the case was closed, declaring it to be a “hoax” and an “inside job.” He never explained these remarks, leaving it unclear whether he really found proof the Phantom Whistler of Paradis was indeed a warped practical joke, or if—as so often happens—this was a case of the authorities concocting a simple “answer” as a way of dealing with the unanswerable.
Posted by Undine at 5:15 AM