I commented on an earlier post that as eerie as unsolved disappearances may be, it is equally disturbing when a person--whether alive or dead--is found, with no clue as to their identity. They are each unwelcome reminders that we all stand on shakier ground than we would like to think.

Today's post, sadly, features examples of both these sort of cases.

In November 1926, Anna Myrle Sizer, a pretty 28-year-old elementary school teacher from Mt. Vernon, Iowa, got off a train in nearby Marion. She had been in poor health for some time, and was on her way to visit her doctor. Her family and friends never saw her again. Although there was a long and intensive search for her--Sizer's family even hired detectives who pursued possible leads for years--no clue to her fate could be found. She had simply vanished. No one believed she had disappeared voluntarily. Sizer was an intelligent, hard-working, responsible woman of "very high character," with no motive whatsoever to leave her life. In the words of her father, "She was not the kind of girl to take a sudden notion to go someplace." A few days after Anna disappeared, a policeman saw a woman matching her description walking aimlessly along Highway 30, between Cedar Rapids and Chicago. Unfortunately, he had not at that time heard of the Sizer disappearance, so he did not detain her. Sizer's family finally came to the conclusion that some psychotic stranger had murdered her and successfully hidden the body. Although they never really stopped looking for Anna--and certainly never forgot her--her loved ones eventually went on with their lives. Anna Sizer's story, however unresolved it may have been, was seen as permanently closed.

In March 1978, an elderly woman died of a heart attack in her bed at the Queenwood East Nursing Home in Morton, Illinois. She was called "Mary Doefour," but the only thing anyone could say for sure about her was that this was not her birth name. Over fifty years earlier, the then-attractive young woman had been found wandering dazedly along U.S. 30, just outside of Chicago. She had been beaten and raped. The traumatized woman was suffering from amnesia, so was unable to say who she was or where she lived. She could only say vaguely that she thought she was a schoolteacher.

The mystery woman received scant press coverage, and no one came forward to identify her. The authorities felt they had no choice but to place her in the Manteno State Hospital. She, literally, became "just another Doe." Chillingly, there were so many woman patients whose identities were unknown that they were all given the name "Mary Doe," with a number added to differentiate them. This proved to be the start of many long, nightmarish years for the woman in various state institutions. Although she was clearly not insane--and some nurses believed that if she had ever been given proper therapy, her memory would have returned--"Mary Doefour" was condemned to a bleak life imprisonment for the crime of being a victim. As a result of the rape, she gave birth to a child, who was immediately placed in an orphanage. She was terrified of men, although after she went blind late in life, that fear subsided. She was given electro-shock therapy and kept in a drugged stupor, thus ensuring that her mind and memory remained a permanent blank. She became one of the living dead, scarcely able to speak or function normally.

After her passing, "Mary" would have been quickly forgotten if her story hadn't caught the attention of Rick Baker, a reporter for the "Bloomington Pantagraph." He became intrigued by the grim mystery surrounding her, and wrote a story about the woman, hoping this bit of publicity might finally uncover the secret of her identity. It did not.

When Baker was later hired by the "Peoria Journal Star," he persuaded his new editor that the Doefour puzzle was worth pursuing. By this point, it had become a personal obsession with Baker to get to the bottom of this tragic woman's life. Although she was beyond all rescuing, perhaps he could at least give her the dignity of her real name.

Baker's follow-up story on Doefour inspired a reader in Iowa to send him a letter. She said the mystery reminded her of a Mt. Vernon, Iowa schoolteacher who had vanished around 1930. She thought the teacher's name had been "Alice Zaiser."

It wasn't much of a lead, but it was the best Baker had to work with. He made some calls to Mt. Vernon, and was eventually able to contact this missing schoolteacher's brother, Harold. He was able to inform Baker that his long-lost sister's name had been Anna Myrle Sizer. Her family had never heard from her again after she got off a train in the fall of 1926. "My parents died waiting to hear from her."

A mysteriously missing teacher in Iowa and a mysteriously found teacher in Illinois. Both had light brown hair and blue eyes. They were about the same age. Could these two women have been one and the same?

Baker had a personal meeting with Harold Sizer, who was understandably reluctant to believe that his sister spent the last fifty years of her life in asylums. There truly are worse fates than death. Although he told the reporter that he simply refused to accept that Anna could have been "Mary Doefour," he did provide a photograph of his sister.

Baker could only find people who had known the asylum patient in her old age. However, when these eyewitnesses were shown the photo of Anna Sizer, they believed they were looking at a young "Mary Doefour." Both women had similar physical characteristics, including a vaccination scar on the left upper arm. Unfortunately, "Mary" had been cremated, making any more scientific comparisons impossible. 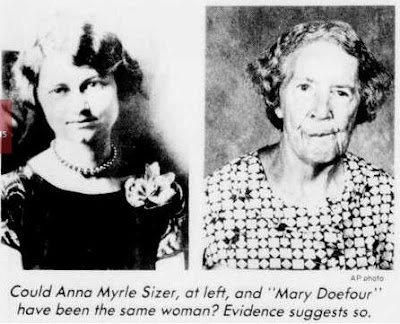 Baker wanted to examine "Mary's" extant medical records, in the hope of finding more clues to her identity. However, they could not be unsealed unless one of her relatives petitioned a judge to force the state to turn them over.

Harold Sizer was presented with all the evidence Baker had collected suggesting that "Mary Doefour" was his missing sister. He was asked if he would give his consent to initiate legal proceedings to have Doefour's records revealed.

Harold refused. He stated that Baker had failed to convince him that "Mary" could possibly be his Anna. He claimed to see no resemblance between the two women. And he did not want Baker, or anyone else, pursuing the issue any longer. This belated investigation was, Sizer said plaintively, "just rubbing salt in the wounds." Although Baker's motives had been good, he realized he was merely forcing Anna's surviving family to relive the most painful episode of their lives, for no really useful purpose. After all, whatever the truth may have been about "Mary," she was long past the need for any human help. Baker was conducting a search that was over fifty years too late.

So that was that. Although Baker remained personally convinced that he had solved this twin riddle, his theory can never be proven.

Anna Sizer and Mary Doefour. May they--or she--rest in peace.
Posted by Undine at 4:44 AM