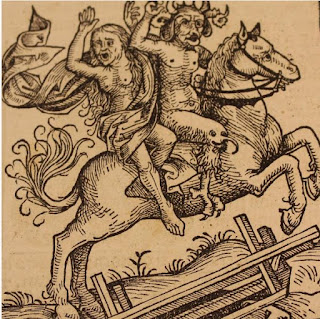 I love a supernatural tale with a long pedigree, and you don't get much more august than the ill-fated Witch of Berkeley. The famed demonic legend was recorded by the 12th century historian William of Malmesbury in his "Chronicle of the Kings of England."  It is filled with the sort of choice language one rarely sees in the drier witch tales of more recent vintage. And you have to love the crowd-pleaser of an ending.

A woman used to reside in Berkeley accustomed, as it afterwards appeared, to crimes, not ignorant of the ancient auguries, a patroness of the palate, arbitress of petulance, putting no moderation to her sins, because she was as yet on this side of old age, although beating on the door of it with a near foot. When this woman was on a certain day holding a feast, a raven, which she kept as a pet, croaked something louder than usual. Upon hearing this, the knife fell from her hand, her countenance became pale, and, groaning, she exclaimed, "To-day my plough has come to its last furrow; to-day I shall hear and receive a great misfortune."

While speaking the words, the messenger of miseries entered. Being asked why he came with a face so full of expression, "I bring news to you," he said, "from that town," and named the place, "of the death of your son, and destruction of all the family, by a sudden ruin." At these words the woman, wounded in her mind with grief, immediately swooned away, and feeling the disease creep to her vitals, invited her surviving children, a monk and nun, with speedy letters, and addressed them, upon their arrival, with a sobbing voice. "I, my sons, by my miserable fate, have always used daemoniac arts; I have been the sink of all vices, the mistress of enticements. There was, however, among these evils, a hope of your religion, which might soothe my miserable soul. Despairing of myself, 1 reclined upon you; I proposed you to be my defenders against daemons, protectors against the most cruel enemies. Now therefore, because I have reached the end of my life, and shall have those exactors of the punishment whom I had advisers in my sin, I ask you, by the maternal bosom which you have sucked, if you have any faith, any piety, that you at least attempt to alleviate my sufferings; and though you will not recall the sentence issued concerning my soul, yet perhaps you will preserve my body by this means. Sew it in a stag's hide, afterwards recline it in a stone sarcophagus, fasten the cover with lead and iron; besides this, surround the stone with three iron chains, viz. of great weight; let there be psalmsingers for fifty nights, and the same number of masses in the days, which may mitigate the ferocious attacks of my enemies. So, if I should lie securely for three nights, on the fourth day bury your mother in the ground, although I fear that the Earth, which I have so often burthened with my vices, will not receive me in her bosom."

Her desires were complied with in the most attentive form. But oh! her wickedness: pious tears, vows, prayers, availed nothing; so great was the wickedness of the woman, so great was the violence of the devil. For, on the first two nights, when choirs of clerks were singing psalms around the body, certain devils, breaking with the greatest ease the door of the church fastened with a huge bolt, burst asunder the two chains at the extremities. The middle one, which was more elaborately wrought, remained entire. On the third night, about cock-crowing, the whole monastery seemed to be overturned from its foundations by the noise of the approaching enemies. One more terrible than the rest in look, and taller in stature, shaking the doors with greater force, dashed them into fragments. The clerks stood stiff with terror, their hair on end, and bereft of speech. He advancing with a proud step to the coffin, and calling the woman by name, ordered her to arise. Upon her answering that she could not on account of the chains, "You shall be loosed," said he, "and to your evil;" and immediately broke the chain, which had eluded the ferocity of the rest, with as much ease as packthread. He also kicked off the lid of the coffin with his foot, and having taken her by the hand, drew her out of the church in the sight of them all. Before the doors stood a proud black horse neighing, with iron hooks projecting over his whole back. The woman was put upon it, and soon disappeared from the eyes of the spectators, with the whole company. The cries of the woman, supplicating for help, were heard for nearly four miles.


You really can't beat medieval chronicles for cautionary tales.
Posted by Undine at 4:40 AM