The morning of November 17, 1924 was a perfectly ordinary one for the Sheatsley family of Bexley, a suburb of Columbus, Ohio. Fifty-year-old Mrs. Addie Sheatsley served lunch to her husband, the Reverend Clarence Sheatsley, pastor of Christ Evangelical Lutheran Church,and their four children, and placidly saw her family all depart on their normal daily activities. A friend briefly visited her and found the Reverend’s wife in her usual cheerful spirits. Neighbors later saw her going about her household tasks. Mrs. Sheatsley was known as a good friend, a caring mother and wife, and an excellent housekeeper. Quite the Norman Rockwell picture.

Except Rockwell never depicted what happened next.

When Rev. Sheatsley returned home that evening, he found his wife was absent, but the children had been at home for some hours. They all noticed a strange burning odor in the house, which they assumed came from some rabbit skins that had become mixed up in the household refuse.

The Reverend later told police that his ten-year old son Clarence had opened the furnace door, and saw nothing unusual. However, when his father later took a look inside the furnace himself, he found the charred remains of his wife. Her small body had just managed to fit inside the miniature inferno, and then the door was closed behind her. 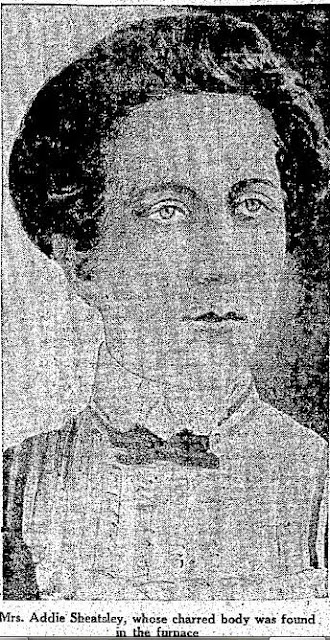 The investigation hinged on these questions: Did she enter the furnace voluntarily? If she did select such a highly unusual and agonizing form of suicide, was it physically possible for her to shut the door behind her? If it was murder, who on earth could have done such a horrific thing to this innocuous suburban housewife? Unfortunately, Mrs. Sheatsley’s body had been in the furnace since approximately two in the afternoon, and was by then too cremated to show if there were any signs of an attack.

The Reverend’s opinions about the death of his wife were oddly inconsistent. In his first statements to the police, he was adamant that there was a crazed murderer at large; it was impossible that Addie could have killed herself. However, the very next day, he had a sudden change of heart. He made a return visit to the county prosecutor to state that, having thought the matter over, he was now equally positive that this was a case of suicide, done in a “sudden seizure of insanity” that he thought often befell women of her age. He also changed his story about having been the first to find his wife’s body. He now told investigators that young Clarence had seen "mama standing in the fire,” but kept that interesting fact to himself, “preferring for some one else to find it out.”

And then there was the now-you-see-it-now-you-don’t bottle of carbolic acid. One of the sons told police that a bottle of the poison that was always kept in the family medicine cupboard, which he knew had been there the day before Addie’s death, was missing. A week later the Sheatsleys announced that—hey, presto!—it suddenly reappeared in the cupboard. There was no sign that Mrs. Sheatsley had been poisoned, and it’s unknown what significance, if any, there was to this incident. But it all adds to the sense that there was something deeply weird about this seemingly ultra-normal household.

The furnace double-doors were about fourteen inches square, and two feet from the floor. They could only be closed by pulling the lining of one door into the lining of the other. When Addie Sheatsley’s body was discovered, her back was towards the opening. The smallness of the space and the position of the body made it seem impossible that she could have, on her own, crawled inside feet first and closed the doors behind her.

The county prosecutor was convinced he had a particularly bizarre murder case on his hands. Several days later, a chemist hired to examine the corpse gave his report. He stated that her lungs showed no trace of carbon monoxide, soot, or ashes, which would have been the case if she had been alive when she entered the furnace. It was his verdict that she had died of strangulation or suffocation, and then the murderer shoved her body in the furnace, obviously in the hope of burning away all trace of her. A pathologist seconded these findings.

All in all, it was looking like the prosecutor’s instincts had been correct from the start. It seemed that the only mystery remaining was the question of who had killed Mrs. Sheatsley and stuffed her body into the furnace, and why.

And then the county coroner derailed the murder investigation before it even properly began. About a week later, he came out with the report of his examination of Addie’s corpse. It was, he declared, “a plain case of suicide.”

As the coroner saw it, Mrs. Sheatsley, “her mind unbalanced as a result of pathological changes through which she was passing [menopause]” decided to kill herself. As soon as she was alone in the house, she opened the furnace door and pulled herself feet first into the fire box. As the flames began to consume her upright body, the “soot and other irritants” provoked a reflex spasm of the vocal chords, causing immediate asphyxiation. It was this spasm that filled the lungs with blood, not, as the initial report opined, manual strangulation or suffocation. As the body burned, it gradually sank into the odd crouching position in which it had been discovered. He also took issue with the initial conclusion that the lack of carbon monoxide in her blood proved that she could not have been breathing when she entered the furnace. He retorted that the reflex action he described would have halted her breathing so quickly there would not have been time for the gas to enter her system. As for the question of how she managed to shut the door after her, he assumed she had somehow rigged a string to the inside of the doors in order to close them over her.

The coroner absolved her family from all suspicion, stating their stories had been “straightforward and reasonable.”

He also obviously found it “straightforward and reasonable” that menopause would be enough to convince any woman that there was nothing for it but to roast herself alive.

The county prosecutor was not convinced.  He announced that he would call a special session of the grand jury to investigate the case.  I have not found any record this was actually done.  If it was, it did nothing to clarify the mystery.  Mrs. Sheatsley's death remained an official suicide.

A local paper, when reporting on the suicide verdict, referred to a recent experiment where a female volunteer had shown it was possible for her to creep through the furnace door. After noting that “the furnace used in the experiment, of course, was cold,” the paper added dryly that “There has been no experiment to prove whether or not any woman could creep into a bed of blazing coals, and inasmuch as there probably will not be any such experiment, the last chapter in the weird parsonage furnace mystery seems to have been written.”

Reverend Sheatsley remained in his pastorate until 1929, when he remarried and took the post of secretary of the board of Lutheran foreign missions. He died in 1943. The last surviving member of the family, Milton, who had been twenty when his mother died, passed away in 1998. No one in the Sheatsley family ever publicly spoke of their family tragedy again.

The last chapter in Addie Sheatsley’s death had indeed been written. Whether or not it was written correctly is something we will never know for sure.