I advise you to pay close attention to this week's WLD. 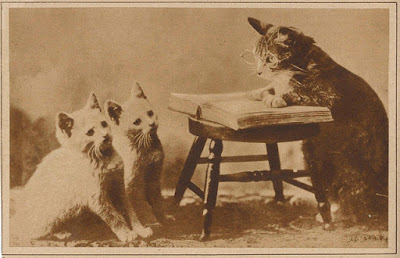 There will be a quiz afterwards.

A bunch of old skeletons found walled up in a monastery.  Paging M.R. James!

Earth's strangest mammal.  (Personally, I would have put human beings in the number-one slot, but...)

Some teenagers find out the hard way why a house was haunted.

Yet another Jack the Ripper suspect.

Mrs. Bungay and the undertaker.

The "scandal sheets" of Regency England.

That time John Adams gave everyone the flu.

Uncovering a necropolis from the early Bronze Age.

Why Venus is not an ideal vacation spot.

The first humans in the Americas were probably much earlier than we have thought.

The pigs of Camp Thomas Paine.

The "brown babies" of WWII.

The case of the disappearing heiress.

The latest from Easter Island.

There may be more Dead Sea Scrolls.

Peanut butter: from sanitarium to supermarket.

The deadly vamp of New Orleans.

The shortest street in the world.

The hacker who saved the internet.

That's it for this week!  Tune in on Monday, when we'll look at a famed Southern haunted house.  In the meantime, here's a jaunty little tune from the Scottish Fiddle Orchestra: