One of Strange Company HQ's crack research team is busy selecting next week's Newspaper Clipping of the Day. 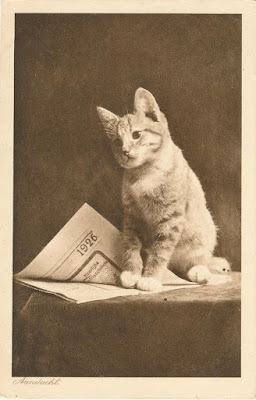 What the hell is the difference between a shanty and a sea song?

For the millionth time: what the hell is the Shroud of Turin?

Why the hell are there so many Regency romance novels?

Why the hell are Alaskans called "Sourdoughs?"

How the hell do butterflies fly?

Watch out for those cursed ferries!

The mysterious railway death of a Scottish baronet.

The world's rarest pasta is in danger of extinction.

There are times when I think scientists have way too much time on their hands.

Our planet's oldest living lifeforms.  I resisted the impulse to add a joke about the Rolling Stones.

How a case of rape was thrown out of court.

A brief history of plastic surgery.

The trees of Celtic folklore.

The challenging life of Isabella Frend.

Well, they finally managed to come up with a gin I refuse to drink.

Some tips for being a successful pickpocket.

The link between Horace Walpole and the East India Company.

What ancient DNA teaches us about the Ice Age.

The star knowledge of the First Australians.

Multitasking tips from the 19th century.

Tales of tribes of headless men.

How to fake your own death for fun and profit.

A side note to the first link: the 1920s sea shanty craze.

How some people can communicate with the dead.

Why technology isn't always the answer.

A reminder that the nurse's monologue in "Romeo and Juliet" is...a bit weird.

If you want to spend your weekend learning how to write cuneiform, here you go.

The tomb of an ancient Roman baker.

An encounter with a phantom ship.

The maidservant and the Walworth robbery.

The Wizard of Marblehead.

Yet another stone-throwing poltergeist.

A look at Battlefield Stalingrad.

A love letter from beyond the grave.

The dead signs of Spitalfields.

That's it for this week!  See you on Monday, when we'll examine a little-known Alabama disappearance.  In the meantime, I'll let Elvis Costello have the last word.