The Body in Stack Number Nine

While I wouldn’t say it’s an everyday occurrence for someone to discover a corpse in a chimney, it has happened more often than you’d like to think.  The following story is one that puts a particularly gruesome twist on such tragedies.

September 20, 1987, started out as a perfectly ordinary day of work at the Georgia-Pacific paper mill in Bellingham, Washington.  At around 5:21 a.m., employee Roy Harris noticed that a smoke alarm had gone off for one of the mill’s ten boilers, which were used to preheat steam for use in the mill.  This particular boiler--number nine--wasn’t used often, so was rarely checked.

The boiler was a 10-foot-square steel structure, with a four-foot-wide lid which was usually left open.  Harris climbed to the top of the boiler, and looked inside.  And got what was likely the shock of his life.  He realized he was looking at--in the clinical words of the later autopsy report--a “partially skeletalized, extensively carbonized” human corpse.  The victim had evidently been alive when they entered the boiler, and essentially gradually roasted to death.

It was, Dr. Gibb later sighed, “not one of my favorite afternoons.”

It was estimated that the body had been inside the boiler from anywhere from several days to several weeks.  The victim would not have had an easy time gaining entrance to their death trap.  They would have had to either climb three flights of stairs or ride a vertical conveyor belt to reach the roof of the plant.  From there, they could have either used a ladder to reach the top of the boiler, or climb using pipes as handholds.  It was also conceivable that the person could have jumped from a nearby roof onto a small structure next to the boiler.  Although the plant had relatively little security, which would have enabled an outsider to access the property, boiler number nine was itself remote, largely hidden, and rarely visited.  As the plant superintendent commented, “You would have a better chance on winning the lottery than having someone look down Stack No. 9.”

The autopsy was able to determine that the corpse was--probably--a male between 25 to 35 years old and weighing 130 to 155 pounds.  He was 5’8” or 5’9” inches tall.  The body had numerous fractures, but it was unknown if they were the result of the fall into the boiler, heat stress, or an assault.

The man wore a shirt, jeans, a denim jacket, and size 8 sneakers.  There were indications that the victim had used the clothing to try to protect himself from the heat, and marks on the inside wall suggested that he had made hopeless efforts to escape his doom.  The body was so charred that authorities were unable to test for drugs or alcohol, as well as making DNA testing an impossibility.

The victim had no personal items, such as a wallet, keys, or a watch.  The only thing found on him was a partially-charred piece of a Continental airline ticket or baggage claim.  Unfortunately, it was not readable enough to identify who had bought or sold the ticket. 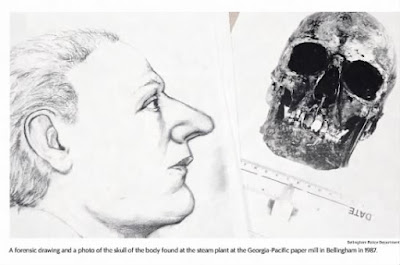 The first task law enforcement faced was putting a name to this extremely unfortunate victim.  It was easily ascertained that no employees or contract workers at the mill were missing.  The skull was used to make forensic drawings which were distributed to law agencies, police, and the media across both the United States and Canada.  No one came forward to suggest who this person might have been.  Although the victim had dental work, a search of dental records in missing-person files found no match.  In short, the authorities were unable to even make a guess about this person’s identity.

In 2006, a potential clue to the mystery emerged.  A steam engineer at Western Washington University named Richard Severson told the “Bellingham Herald” that in the late summer of 1987, he had given a woman a tour of the University’s steam plant.  He recalled that she began behaving very oddly when she saw the boilers, asking if she could go inside one.  When he directed her to an inactive boiler, she excitedly climbed in, playing inside the thing like a small child frolicking in a jungle gym.  Severson was so disturbed by this strange woman that he asked her to leave.  He said he had mentioned to her the boilers at the Georgia-Pacific plant, which he assumed were inaccessible to non-employees.  When he read about the grisly discovery at the plant, he wondered if there was a connection.  However, police remained reasonably certain that the corpse could not have been female.

The obvious next mystery was: how on earth did this person end up in such a strange, inaccessible place?  Was it a particularly grisly suicide?  A weird, self-destructive environmental protest?  Murder?

Could it have been an evening of “fun” gone very, very wrong?  In 2006, an employee at Mt. Baker Plywood mill told police that shortly after the body was discovered, he talked to a visitor at his plant.  This man claimed to be part of a group who would occasionally sneak into Georgia-Pacific and climb the towers.  An employee at the plant would help them get into the mill after it closed for the day.  He went on to say that if any of these urban explorers feared they had been seen by security guards, this person would blow a whistle and they would all meet in some pre-arranged spot.  The visitor said that someone from New York had recently joined the group, but on their latest outing, failed to turn up at the pre-arranged location.  The obvious implication is that the New Yorker, while prowling around the roof, accidentally fell into the boiler.  State police in New York provided information on five missing men who could possibly be a match for the victim, but these five files were all lacking dental records.  Police were unable to locate the Mt. Baker Plywood visitor, so it is impossible to say if this story can be trusted.

In 2001, the Georgia-Pacific mill closed, and has long since been demolished.  In 2006, Bellingham police closed their investigation, citing their complete lack of leads.  Nothing has happened in the years since then to change their view.  Even the current location of the victim’s corpse is unknown.  Virtually no physical traces remain of this particularly puzzling death.