It's the last day of September, and Autumn is in full swing here at Strange Company HQ! 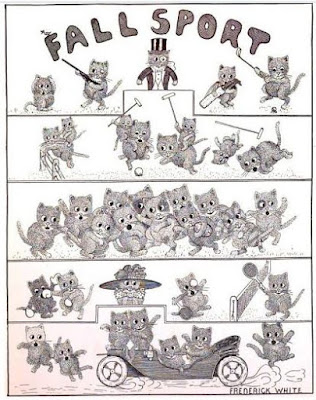 That time a bucket started a war.

The Wright brothers as babysitters.

An ancient rock art site tells quite a story.

The place where you can get away with murder.  I hope I'm not giving anyone vacation ideas.

The "real" Count of Monte Cristo.

The vampire of Rhode Island.

A man with interesting tastes in home decor.

Finding a wife for Philip, Duke of Burgundy.

The difficulty with prosecuting a deaf and dumb man in 1825.

The liner that was hit by one freaking big wave.

The Disneyland of graveyards.

The tale of a pauper's coffin.

The magician who was shot on stage.

Being cuckolded in the Regency Era could have its financial benefits.

That time when W.B. Yeats and Aleister Crowley got into a magic duel.

That time when Galileo tried to determine the size of Hell.

Kingsley Amis didn't think too much of John Keats.

For those of you who are sick of theories about who Jack the Ripper was, here's a theory about who the Zodiac Killer was.  Unless you're sick of those, too.

The murder of a grave-robber.

The display of human remains in museums.

Why men stopped wearing hats.  I wish men today would go back to wearing them.  And three-piece suits.  With spats.

I am now wondering how many Spanish Flu victims were really killed by their medicines.

A man who did much good, and much evil.

Raccoons are really, really smart.  We have some raccoons in my area, and that was an observation I made some time ago.  You don't want them anywhere near your garden, though.

A brief history of the Rosetta Stone.

In which Mr. Graverol meets the Devil.

How to make Irish seaweed pudding.

Hester Stanhope, Queen of the Desert.

In which Charles Dickens discusses the news.

That's it for this week!  See you on Monday, when we'll look at yet another cautionary tale about angering fairies.  In the meantime, here's the Rose Ensemble.