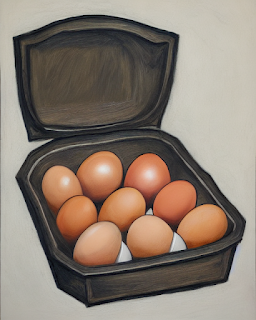 A very odd and mysterious burial was described in the "Sydney Morning Herald," September 7, 1866. (Via Newspapers.com)

In demolishing a house recently, for the purpose of widening the Rue Guy Lussac, near the Pantheon, the workmen discovered in one of the chimney jambs a cavity in which was the skeleton of an infant of about a year old. The bones reposed on a layer of eggs, still entire, to the number of more than 60, and near the hand was a little leather ball, which had formerly been white. The heat had partly calcined the bones of the legs, and the eggs had been dried till the centres were not larger than a pea. The infant appears to have been in this receptacle for some 25 or 30 years, which besides had been made and closed up by some practised hand, as there were no external signs of any derangement. Conjecture is quite baffled as to the reasons for such a singular tomb, and for the accompanying eggs. Towards 1804 the house was inhabited by a religious community, but in the year 1807 it became a furnished lodging-house.