Welcome to the first Link Dump of Autumn 2022!

The Strange Company staffers are late returning from summer vacation.  Typical of them. 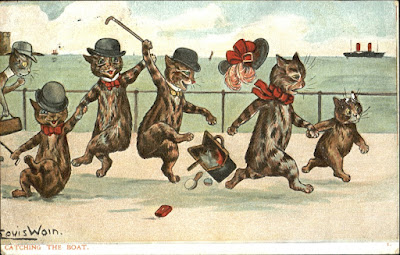 A baby mix-up with a happy ending.

A school in India has a new student.

Corpse-hunting on a New York river.

The dubious joys of temperance melodrama.

A structure near Prague that's older than Stonehenge.

In 1978, a Navy frigate was attacked by an enormous (and still mysterious) monster.

Believe it or not, we're still uncovering dreadful details about Nazi death camps.

That time when Londoners cracked down on freak dances.

The last time a king was buried in Westminster Abbey.

A newly-discovered cave that's something of an ancient time capsule.

When Japanese time met a European clock, and things didn't go too well.

There are few foods I love more than sourdough bread, but even I wouldn't want to eat any baked by a 19th century miner.

A UFO crashed into the Pacific Ocean in 2014. And people would like to find it.

For this week in Russian Weird, crop formations come to Lake Baikal.

How the Bronx got its name.

The sounds of meteorites crashing into Mars.

When ancient Rome had a monster problem.

The last days of John Keats.

A possible explanation of the "Wow!" signal.

Propaganda and the murder of Jane McCrea.

The last of the Spitalfields Market cats.

The adventures of HMS Nautilus in 1807.

Some autochromes of Tsarist Russia.

A "witchcat" gets away with murder.

The attack on Sempringham Priory in 1312.

That's it for this week!  See you on Monday, when we'll look one of those murder mysteries that are seemingly without any clues.  In the meantime, here's some Telemann.