The Fairy Thorn: A Cautionary Tale About Fortean Firewood 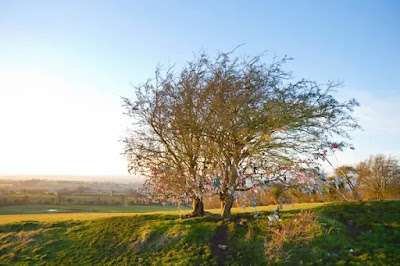 This week’s post will demonstrate a vital gardening tip:  Never, ever mess with a tree inhabited by fairies.  The Little Folk have ways of making you regret it.

Our story is set in Fintona, a village in County Tyrone, Ireland.  In late March 1950, the Fintona Golf Club received permission from one Raymond Browne-Lecky to do some landscaping on the golf course on his lands.  Among the changes he OK’d was to remove a thorn hedge that was in the way.  Unfortunately, the gardeners hired to do the job misinterpreted their instructions, and instead used a bulldozer to take down a 300-year-old “fairy thorn”--a tree revered in Ireland for its ancient supernatural associations. Fintonans were incensed at the desecration.  “The people in the village are in a rage over it,” Browne-Lecky told a reporter for the “Northern Whig.  “For my part, however, the hatchet is buried, because it was apparently a mistake.  I was not angry because of possible revenge from the fairies--I’m afraid I don’t believe in them.  But many people do, and that’s why the villagers are upset about it.”

It didn’t take long for the fairies to show their displeasure.  72-year-old pensioner James McAnespie took some of the bulldozed tree to use for firewood.  The “wee folk” evidently saw this as adding insult to injury.  As soon as McAnespie began burning the wood, things started to happen.  Mighty strange things.  He began to hear the sound of tinkling bells in his house.  Tiny figures the size of wasps began flying all around him which were impossible to catch.

On April 16, 1950, McAnespie used up the last of the wood, and--showing an astonishing inability to take a hint--set out to get more.  That night, his neighbors noticed that he had not returned home.  That was unusual, as he was normally in his house by 8 p.m. or so.  After they were unable to find him anywhere, the neighbors went to the police.  A search party was immediately organized.

The searchers went across the countryside, calling McAnespie’s name regularly, but without getting any reply.  Then, at 11:30 p.m., they found the missing man standing motionless on the exact spot where the fairy thorn had stood.  As they approached McAnespie, he came out of his seeming trance, and returned to the village with them.

The story he told was this:  He gathered sticks for firewood around the place where the fairy thorn had been bulldozed.  After tying them into a bundle, he began to go home.  However, when he walked over the spot where the tree had stood, he suddenly became unable to move or speak.  “I couldn’t even let go the rope,” he said.  “It was like as if I was riveted to the ground.”  He stood there helplessly for two hours, hearing bells ringing around his feet.  He saw a ditch all around him, and a big house with lights inside it.  He also saw two fairies--”wee fellows,” he called them.  In short, if Mr. McAnespie did not believe in fairies before, he certainly did now.

After McAnespie died four years later, Irish papers carried brief death notices commenting that he was still remembered as “the man who was seized by the fairies.”