The Sorceress of Kilkenny 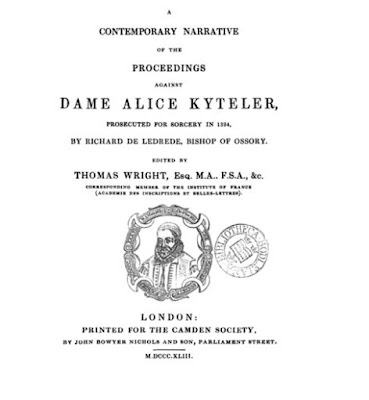 Back in the bad old days, people were accused of witchcraft for a variety of reasons. Some were the victims of a deluded, but utterly sincere hysteria. Others found themselves charged out of personal spite or envy. Still others were targeted by psychopaths who took advantage of a socially acceptable way to exercise their sadistic instincts. And some witch accusers had--as was likely the case in the following story--a simple financial motive.

Alice Kyteler (or Kettle) came from a family of prosperous Flemish merchants who settled in Kilkenny, Ireland in the mid-thirteenth century. Alice married a merchant and moneylender named William Outlaw. They had a son, also called William. At a fairly young age, William junior became his mother's chief partner in the highly successful family business, particularly after his father died sometime before 1300. Moneylenders are generally not terribly popular, but they can certainly turn a profit. Alice and her son became extremely wealthy and influential figures in their community.

By 1302 Alice was remarried, to another moneylender, Adam le Blund. In that same year, the couple was accused of having poisoned her first husband, but the charges were evidently not pursued. In 1307, Adam signed a quit-claim granting his stepson William all of his goods, as well as canceling any debts William owed him. We do not know for sure what led Adam to make this notably munificent act, but we have ample proof that Adam's children from his previous marriage didn't like it one bit.

Adam le Blund died not long afterward. Alice then took on a third husband, Richard de Valle, a rich landowner from Tipperary. De Valle proved to be just as generous towards his stepson as his predecessor had been. By 1316, Alice was once again a widow. She subsequently sued de Valle's son for nonpayment of her widow's dower. Alice clearly did not let the remarkably short lifespans of her husbands discourage her from matrimony. By 1324, she had married yet again, to Sir John le Poer.

Alice's stepchildren continued to seethe over how she and her son had profited at their expense. The unusual and seemingly unnatural tendency her husbands had shown to favor her over their blood kin led them to the conclusion that she was practicing witchcraft. Only the dark arts, they reasoned, could explain the strange hold she seemed to have over her spouses.

In 1324, the stepchildren made a formal accusation to Richard Ledrede, Bishop of Ossory. The charges were colorful ones: Alice and William allegedly worshiped a demon called the Son of Art, and practiced animal sacrifice as offerings to him. (Alice also had sexual relations with the entity.) They supposedly held nightly Satanic rituals in the local church. They had a skull of a decapitated thief, in which they placed such unwholesome items as the internal organs of cocks, worms, fingernails cut from dead bodies, and the hair cut from boys who died unbaptized. These were used to make potions that would cast spells over people. Alice would sweep the streets of Kilkenny between compline and twilight, raking all the filth towards the doors of her son while softly murmuring, "To the house of William my sonne/Hie all the wealth of Kilkennie towne." All this sorcery was used in order to lure rich men into marrying Alice and bestowing all their wealth on her and her son. Just for good measure, Alice was also accused of poisoning John le Poer with that classic inheritance powder, arsenic. Le Poer had become mysteriously emaciated, and his hair and nails dropped off. His suspicions aroused by these alarming symptoms, he stole his wife's keys and opened her chests. Inside them, he found sackfuls of "horrible and detestable things," which he sent to the bishop as proof of Alice's diabolical practices.

The bishop wrote to Roger Outlaw, the king's chancellor in Ireland, demanding Alice's arrest. As it happened, Outlaw was a close relative--perhaps even a brother--of Alice's first husband. He chose to take his former in-law's side in the dispute. He refused to arrest the alleged sorceress on the grounds that he could not do so unless Alice had been tried by the church and excommunicated. Outlaw also appointed advocates to speak on her behalf.

Ledrede followed orders and promptly excommunicated Alice--in her absence, as she had prudently fled to Dublin. William Outlaw was charged with heresy and ordered to appear in court. Fortunately for him, he, like his mother, had powerful friends, most notably Arnold le Poer, Kilkenny's seneschal [chief administrative and judicial officer.] Le Poer came to William's defense by imprisoning Ledrede until the deadline for Alice's son to appear before the bishop had passed.

Ledrede retaliated by again ordering William and his mother to appear before him, as well as placing the entire diocese under interdict, meaning that no baptisms, marriages, or funerals could take place. (However, this interdict was lifted by his superior, the vicar of the archbishop of Dublin.)

Ledrede--dressed in his full episcopal regalia for maximum impact--stormed into le Poer's courtroom to demand Alice and William's arrest. Le Poer shrugged and had the bishop thrown out, calling the obstreperous man of God "an ignorant low-born vagabond" and "that vile, rustic interloping monk," to boot.

At this point, Alice once again enters our story. She went to the Dublin court charging Ledrede with defamation of character. She argued that her excommunication had been unlawful. All the squabbling parties eventually met in the Dublin court to present their various cases. Arnold le Poer claimed that he was under no obligation to obey Ledrede: "If some vagabond from England has obtained his bull in the pope's court, we do not have to obey it unless enjoined on us by the king's seal." He appealed to Irish nationalism, declaring that "heretics have never been found in Ireland...Now this foreigner comes from England and says we are all heretics and excommunicates...we must all unite against this man."

Unfortunately for Alice, le Poer's eloquence had little effect. Patriotism was all well and good, but the court felt that the supremacy of the Church came first. They took a very dim view of the disparaging way in which Ledrede had been treated, and ordered that the bishop be allowed to pursue the charges against these accused witches in any way he saw fit.

Alice decided that the game was up. She hurriedly left Dublin and managed to disappear. It was believed she resettled somewhere in England or Flanders, but her subsequent history is unknown. Ledrede formally charged William Outlaw with heresy, usury, perjury, adultery, clericide, and a number of lesser offenses. William pled guilty and threw himself on the bishop's mercy. Ledrede imprisoned Alice's son, but William's powerful friends induced the bishop to reduce the sentence to one of public penance. Outlaw was ordered to hear three masses a day for a period of one year, feed the poor, and pay for a new lead roof for St. Canice's cathedral. However, when Ledrede learned that William was failing to follow these orders, he threw him back into jail.

Outlaw was still considerably more fortunate than others pursued by the bishop. Former servants of Alice were arrested and, it is said, immediately confessed to having assisted Alice in her black magic rituals. They even admitted to other crimes of which no previous mention had been made. They were given various punishments: fines, banishment, public penance, floggings, even execution. The luckiest ones were able to flee the jurisdiction. "And thus," in the words of a contemporary chronicler, "by the authority of Holy Mother Church, and by the special grace of God, that most foul brood was scattered and destroyed."

The most notable victim of the witch hunt was Alice's maidservant, Petronilla de Meath. Under torture, she confessed to acting as a "medium" between Alice and the demon Son of Art. Petronilla declared that although she was an expert in the Black Arts, she was nothing in comparison with Alice, whom she stated was the most skillful witch in the world. William Outlaw, the maidservant added, deserved death as much as she, for he had worn the devil's girdle around his body for a year and a day. Lacking William's wealth and influence, the unfortunate woman was burned at the stake. A large bonfire was built in the center of town, where the bishop solemnly burned the sacks containing Alice's magical items retrieved by John le Poer.

A secondary casualty to Ledrede's personal Inquisition was Arnold le Poer. The bishop accused him of heresy and had him excommunicated and imprisoned. Le Poer died in his cell in 1331.

William, understandably cowed by all these terrifying examples of the bishop's wrath, gave up the fight. He literally prostrated himself in the mud before an assembly of Ledrede and various members of the clergy, and confessed all. Ledrede increased his penance. In addition to all the other instructions, Outlaw was ordered to make a pilgrimage to the Holy Land. And that lead roof for the cathedral had to be up within four years. As a footnote, the weight of all that lead caused the cathedral to collapse in 1332.