Our story opens in 1924, when a Richmond, Virginia woman named Claudia Fonda bought a two-week-old filly she called Lady Wonder. Mrs. Fonda bottle-fed the filly, and, before long, came to think of the animal almost as her own child. Nothing unusual was noted about Lady Wonder until one day, it struck Mrs. Fonda that the horse did not wait to be called before running to her--the owner merely had to think of beckoning her over. From that time on, Mrs. Fonda studied the filly more closely, and became convinced Lady possessed unusual mental powers. In short, she credited Lady not only with human intelligence, but psychic abilities as well.

By the time Lady was two, Mrs. Fonda had worked out a system where the horse used large lettered children's blocks as a sort of simple typewriter. Fonda later designed a piano-sized device that used a double row of keys. When Lady would nudge a key with her nose, a tin card popped up bearing a number or letter, enabling the horse to solve math problems and spell out words. Even, we are told, predict the future. On one occasion, Lady spelled out the word, "engine." A minute or so later, a tractor passed by the farm. It was reported that Lady could tell married women their maiden names and correctly guess the sex of unborn babies. While she was not infallible, she picked the winners of ball games, handed out personal advice, and revealed hidden details of people's lives with often unnerving accuracy.

The fame of this unusual horse spread, particularly after she picked the winner of the Jack Dempsey/Jack Sharkey fight in 1927. Crowds of people flocked every day to the Fonda farm to quiz the "Wonder Horse"--at a price of three questions for a dollar. It is estimated that, in total, Lady drew over 150,000 visitors. (As a bonus, visitors were also greeted by the sight of Claudia's piano-playing Pomeranian, Pudgy. We are told he did a killer rendition of "The Bells of St. Mary's.") Mrs. Fonda even hired a press agent to deal with the media attention. (Before engaging the man, she first asked Lady, "Is this man honest?" When the horse answered in the affirmative, the deal was struck.) 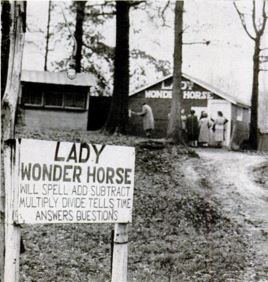 The most famous episode in Lady's career of equine savant came in 1952. A little boy from Massachusetts, Danny Matson, had been missing for months. The investigation into his disappearance was stymied. Figuring there was nothing to lose by the effort, someone asked Lady if she knew where the child could be found. The horse spelled out the words, "Pittsfield Water Wheel." A policeman who heard of this response wondered if it could have referred to an abandoned quarry that was known as "Field and Wilde Water Pit." A search was made, and, yes, that was where Matson's body was found. A tragic ending to the story, but at least the boy's parents no longer had to live with the agony of an unsolved mystery. Unfortunately, Lady was less accurate in the case Gary Hayman, a nine-year-old who vanished from his school in Providence, Rhode Island. When the boy's mother asked the horse about her son, Lady communicated that the boy was in Kansas, "hurt," but still alive. However, some months later a skull later assumed to be Gary's was found in the woods near his home. His death was ruled accidental. [Note: Some students of the Hayman disappearance have questioned whether the skull was of the missing boy.]

Among Lady Wonder's more successful predictions were the presidential elections of Roosevelt, Truman, and Eisenhower, as well as the entry of America into World War Two. (And, yes, she did pick winners of horse races.)

In 1928, pioneering parapsychologists William McDougall, Dr. Joseph Banks Rhine, and Dr. Lousia E. Rhine of Duke University spent a week conducting various examinations on the now world-famous horse. For instance, J.B. Rhine wrote "Mesopotamia, Hindustan, and Carolina" on a piece of paper. While keeping the words hidden, he asked the horse what he had written. Using her "typewriter," Lady immediately picked out the correct words. By the time their testing came to an end, McDougall and the Rhines had concluded that the Lady was indeed a Wonder. The following year, the Rhines wrote a paper describing their tests for the journal "Abnormal and Social Psychology." They concluded that "There is left only the telepathic explanation, the transference of mental influence by an unknown process. Nothing was discovered that failed to accord with it, and no other hypothesis seems tenable in view of the results." Another psychologist, Thomas L. Garrett, made his own study of the horse and concluded that there was "no trickery involved."

There were, of course, many who disagreed with this analysis. They saw Lady Wonder and her owner as simply a fraudulent sideshow act. A New Jersey professor named John Scarne made his own visit to the Lady, which left him convinced that the horse was merely following subtle cues given by her owner.

He wrote, "Mrs Fonda carried a small whip in her right hand, and she cued the horse by waving it. I detected Mrs. Fonda doing it every time the horse moved the lettered blocks with the nose. This method of doing the trick might have puzzled me if I hadn't known that the placement of horse's eyes on either side of the head gave them wide backward range of peripheral vision. Therefore it offered no problem for me to detect....The shaking of the whip first time was the signal for Lady to bend her head within a couple of inches to the blocks. A second shake of the whip was the cue for Lady to continuously move her head in a bent position back and forth over the blocks. When Lady Wonder's head was just above the desired block Mrs. Fonda made the horse touch the block with her nose by shaking the whip a third time. It was as simple as that." Others responded to this debunking by pointing out that Lady often answered questions accurately when her owner did not know the correct response, or when Mrs. Fonda was not even present. Yet another researcher, a Dr. Gayle, simply conceded that he was baffled by the horse. In 1927 he told the "Richmond Times-Dispatch," "I am perfectly willing to admit that I have no idea how she arrives at the correct answers to our questions. There is no conscious trickery here, I am convinced. But I am not converted to the mind-reading theory. What's the solution of the puzzle? I don't know!"

Mrs. Fonda never wavered from her genuine belief in Lady's wild talents. She asserted that every horse would show the same abilities, if their owners would only bother to teach them the alphabet. Lady, Mrs. Fonda explained, was merely an "educated horse."

When the "educated horse" herself was asked "how she did it," she simply spelled out "Mind." She continued her placid existence as America's "psychic horse" until her death from a heart attack on March 19, 1957. It is said that Claudia Fonda never quite recovered from the loss. She followed her beloved horse into the grave two years later.