A Death and a Disappearance

William "Bill" Lancaster was an Englishman born in 1898. In his youth, he emigrated to Australia. When World War I broke out, he served in the Australian Army and, later, the Australian Flying Corps. In 1918, he moved back to England and joined the R.A.F. By the time he left the military in 1926, he had caught the flying bug, and hoped, like Charles Lindbergh and so many others of the time, to make a name for himself in the new, glamorous field of professional aviation. In 1927, he conceived the idea of trying to set a long distance record by flying to Australia.

In October of that year, Lancaster set on his way in a new light plane called the Avro Avian. He flew with a passenger--a young Australian journalist named Jessie "Chubbie" Miller, who had helped finance the flight, and was now acting as his manager and business partner. 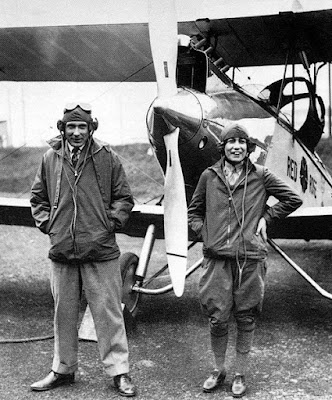 Although the trip earned the pair a great deal of publicity--it was at that time the longest flight ever taken by a woman--it was otherwise unsuccessful. Bad weather brought them down in Sumatra, so they were not able to reach Australia until March 1928. By then, a luckier pilot had already broken the record.

By that point, however, Lancaster had other things than flying on his mind. During their ill-fated trip, he and "Chubbie" had fallen in love. They moved in together, undeterred by the fact that Lancaster's Catholic wife refused to grant him a divorce.

For the next four years, all seemed to go well. The pair moved to America, where Lancaster entered a career selling airplane engines. Miller took up flying herself, competing in the 1929 "Powder Puff Derby" for female aviators. (Among her rivals was Amelia Earhart.) the following year, she set several transcontinental speed records.

Then, trouble entered the picture in the form of another airman, Hayden Clarke. Clarke, who was also a journalist, had been hired to help Miller write her life story. While Lancaster was in Mexico looking for work, Miller and her collaborator became lovers. She wrote Lancaster a "Dear John" letter announcing she was leaving him for Clarke.

Lancaster was still in love with Miller, so this betrayal naturally hurt him deeply. However, he played his role of English Gentleman to the hilt, even offering to act as best man. However, by the time he returned home on April 20, 1932, his mask of gallant stoicism had crumbled considerably. He and Clarke had a bitter quarrel, which ended with Miller agreeing to postpone the marriage for a month, to give all three of them "time to think."

That night, Miller went to bed alone, while her past and current lovers retired to camp beds on the outside veranda. Later, Lancaster declared that before going to sleep, he and Clarke had buried the hatchet.

Unfortunately, by the time he told this story, Hayden Clarke was no longer available to confirm or refute this claim.

At some point in the middle of the night, Clarke was killed by a gunshot to the head. The weapon was a gun Lancaster had bought just before returning to Florida. Was it, as Lancaster insisted, a case of suicide, or--as nearly everyone else suspected--a case of a jealous man getting revenge against a romantic rival?

Two typewritten suicide notes were found near the body, but experts doubted their authenticity. After some stern questioning from the police, Lancaster admitted that he had forged them, out of fear of being accused of murder, but continued to swear that Clarke had shot himself. Few people believed him, with the result that Lancaster was put on trial for murder.

As his trial progressed, the defense surprised everyone by presenting a plausible case that Lancaster was actually telling the truth. It turned out the dead man had more than his share of flaws and personal problems. Clarke had neglected to tell Chubbie that he was a bigamist: he had not just one, but two wives in the background. In addition to this, he supplemented his income by various con jobs, and was a drug addict to boot. Friends of Clarke testified that he often spoke of killing himself. Powder burns on Clarke's skull led the defense to argue that the shot had been fired while the gun was resting against his head, which would make the theory of suicide more likely.

Lancaster proved to be his own best witness. He impressed everyone in the courtroom as dignified, sincere, and upright. After reading his private diary, the judge told the jury that "In all my experience, which has been broad, I have never met a more honorable man than Captain Lancaster."

All in all, it turned out to be a classic case of "reasonable doubt": although Lancaster could not prove that he was innocent of killing Clarke, the prosecution could not prove that he was guilty, either. (There were even rumors that "Chubbie" had actually shot Clarke, with Lancaster doggedly "covering-up" for the woman he loved.)  The trial ended on an unsatisfactory note, where Lancaster was acquitted, but still had a grim cloud of suspicion hanging over him. Although he was a free man, he was broke, his career as an aviator seemed ruined, and even though she had spoken in his defense at the trial, his affair with Chubbie seemed doomed as well.

Lancaster decided that a bold step was needed to try to regain both his reputation and his girlfriend. He planned to break the world record for flying from England to Cape Town, South Africa, an honor then held by the famed aviator Amy Johnson. He would have to make a flight of 6,500 miles in less than four days and seven hours. If he could only do this, the acclaim would possibly help people to forget his ignominious past. He was also encouraged by Chubbie's agreement to give their relationship another try when he returned.

If Lancaster succeeded, it looked like his problems would very likely be over. If he failed, Lancaster confided to friends, life would no longer be worth living.

He faced a daunting effort. His plane was slower than Johnson's, meaning that he would have less time on the ground to rest and refuel. He would have no more than two hours of sleep at a time. Plus, after the long ordeal of his murder trial, he was hardly in top shape, either physically or mentally. He had not flown at all for over a year. And yet, he was setting out alone over a nearly 7,000 mile flight, which included some 1,500 miles of fearsome desert. It was the act of a man who was either very ready to die or very desperate to live.

Lancaster began his flight on April 11, 1933. He carried no supplies other than a small lunch packed by his mother and a 2-gallon drum of water. Practically from the beginning, he was in trouble. He repeatedly got lost, and was confused by strong winds. He landed in the wrong place several times. By the time he landed at Reggan, a base in the Sahara, he was already ten hours behind schedule, and was obviously completely exhausted. Officials there begged him to give up, but he refused. Whatever happened, he obviously could not live with himself if he turned back now. Away he went. And, thirty-six hours into his flight, he vanished somewhere over uninhabited desert that was locally known as the "Land of Thirst." He was never seen alive again.

For nearly three decades, Lancaster's disappearance remained a mystery. Some assumed that he simply suffered a fatal accident during the flight. However, the most popular theory was that he had committed suicide after realizing that he had no chance of breaking Johnson's record. He himself had admitted this was a "do-or-die" effort. Faced with inevitable failure, it seemed plausible that he had chosen to end it all with some dramatic deliberate crash somewhere in the African desert.

The riddle of the pilot's end was not solved until February 12, 1962. A French patrol attached to an atomic station in the Sahara discovered the wreckage of a crashed airplane in the desolate sands, with the mummified body of a long-dead man lying beside it. The question "What happened to Bill Lancaster?" had finally been answered. 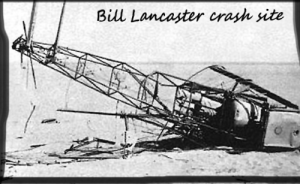 His diary was found in the plane, which revealed a harrowing story. While over the Sahara, his plane suffered engine failure which forced him to crash far north of his expected flight plan, which explained why searchers failed to find him. Although Lancaster had not been badly injured in the crash, the plane was a total wreck. He was doomed unless a rescue team arrived. He lingered for eight days, suffering hunger, thirst, and the agonized waiting for help that never came. Four days after the crash, Lancaster knew he would probably not survive. He put on a show of gallantry and bravery to the last, writing, "Chubbie my sweetheart, and mother my best friend and father my pal, do not grieve, I have only myself to blame for everything. That foolish, headstrong self of me." His final words, written on April 20, were, "So the beginning of the eighth day has dawned. It is still cool. I have no water. I am waiting patiently. Come soon please. Fever wracked me last night. Hope you get my full log. Bill." It is thought he died soon after penning those words.

It was the anniversary of the death of Hayden Clarke. Lancaster's diary never mentioned his former friend, which could suggest that he faced his own demise with a clear conscience.

If Lancaster was innocent of Clarke's murder, he was a remarkably tragic and unlucky figure. If he was guilty, no one can say he didn't expiate his crime.
Posted by Undine at 4:44 AM