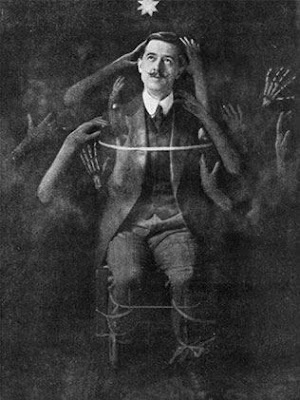 Well, here's a Louisville ghost story that starts off with a bang. From the "Eau Claire Daily Leader," March 25, 1885:


Annie Coleman rushed excitedly into Lucien Alexander's drug store this morning, and threw a small package on the counter. She requested that it be examined, and asked the clerk to tell her what it was.

The clerk, on opening the bundle, found a large black thumb. The relic had been picked up on Congress street, between Eighth and Ninth. After leaving the drug store, Coleman went into Dr. Payton's office and asked his opinion of the fragment of mortality. From there she went to several neighboring places, in all of which she displayed her trophy and solicited opinions.

In an old house on Congress street, between Eighth and Ninth, Annie Coleman and her husband live. Within the last year the woman claims that eight deaths have taken place in their present abode.

The numerous persons deceased conspiring together in the spirit land have determined to render miserable the lives of those now residing in the former home of the departed.

With this idea in her head, Annie very positively asserts that the ghostly visitors have haunted her house steadily for the past four weeks and unlike the ordinary every-day ghost, they kick up as much of a row in daylight as in darkness. As substantial evidence of the truth of what she says Annie produces a number of fingers, toes and ears which she has at various times picked up in a little side alley next to her house. The uneasy spirits who so disturb her began their unseemly conduct just two weeks ago yesterday.

On the morning of that day she found in the side alley a tiny package neatly and securely sewed in silk. Opening it, she discovered two fingers, evidently those of a white person. She told several of her neighbors, who solemnly advised her to bury them. This was done with all the usual ceremonies incident to such an occasion.

A few days later mysterious sounds emanated from the closed doors of closets, and Mariah Brent, another inmate, was startled to find a white form bending over her while at work ironing. Mariah could give no description of the specter, beyond that it was big and white, and she seemed paralyzed by its presence. After this, almost daily, packages were picked up, every one of which contained some portion of a human body, a few fingers, toes, or ears and an occasional nose.

These were all buried with great reverence by the spook-ridden family of Coleman, who hoped eventually in this way to bury the whole of the specters by piecemeal.

I wasn't able to find any more about this story, so I have no idea what happened next. I'm really rather grateful for that.
Posted by Undine at 4:40 AM