While you read this week's links, sit down and join us for some tea! 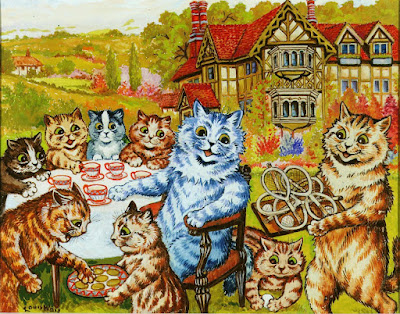 A historic house of secrets.

In which Earl Warenne looks for a wife.

In which Harvard scientists search for crashed UFOs.

The WWII battle for Monte Cassino.

When Howard Carter helped open Tutankhamen's tomb, he may also have helped himself.

The life of a Judean shepherd from 6,000 years ago.

In which Robin the Trickster battles Stiff Dick.  Not to worry, the story is totally family-friendly.

It's not too many people who can put on their business cards the occupation "football-inventor/mermaid hunter."

The life and death of the iceberg that sunk the Titanic.

How cowards came to be called "chickens."

How mammals survived the "doomsday asteroid."

In which Charles Dickens goes ghost-hunting.

Books that are most likely lost forever.

The mystery of the "ghost blimp."

The slave who mailed himself to freedom.

The genetic secrets of a woman who lived in Japan 3,800 years ago.

When New Yorkers could go on a relaxing country drive.

In which Brendan Bracken writes to Max Aitken.

Cats and the supernatural.

The disappearance of the male movie fan.

A strange case of amnesia.

The gruesome case of the doll in the coffin.

A 400-year-old shipwreck that turns out to be a time capsule.

That's it for this week!  See you on Monday, when we'll look at a particularly striking ghost story.  In the meantime, I recently discovered "bardcore"--modern pop songs given a medieval/Renaissance flavor.  It's a lot of fun.