Mr. Craighead and the Lyke Wake: A Cautionary Tale 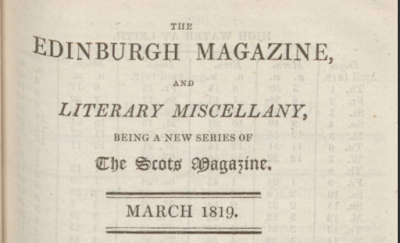 The old British custom of “lyke wake” consisted of keeping a night watch kept over the recently dead.  ("Lyke" is an archaic word for "corpse.")  It was usually a quite festive affair, where many people gathered for feasting and frivolity of various sorts.  This combination of dissolution and dissipation was, as you might imagine, the setting for any number of curious events.  One of the strangest “lyke wakes” on record was described by someone using the pen name “Taodunus” in the “Scots Magazine” for March 1, 1819.  This incident--very well known at the time--took place sometime in the middle of the 18th century.  The story is excellent corroboration for one of life’s top lessons: practical jokes involving corpses seldom turn out well.

Mr. William Craighead, author of a popular system of arithmetic, was parish schoolmaster of Monifieth, situated upon the estuary of the Tay, about six miles east from Dundee. It would appear that Mr. Craighead was then a young man, fond of a frolic, without being very scrupulous about the means, or calculating the consequences. There being a lyke wake in the neighbourhood, attended by a number of his acquaintances, according to the custom of the times, Craighead procured a confederate, with whom he concerted a plan to draw the watchers from the house, or at least from the room where the corpse lay. Having succeeded in this, he dexterously removed the dead body to an outer house, while his companion occupied the place of the corpse, in the bed where it had lain. It was agreed upon between the confederates, that when the company was re-assembled, Craighead was to join them, and at a concerted signal, the impostor was to rise, shrouded like the dead man, whilst the two were to enjoy the terror and alarm of their companions.

Mr. Craighead came in, and after being sometime seated, the signal was made, but met no attention; he was rather surprised; it was repeated, and still neglected. Mr. Craighead, in his turn, now became alarmed; for he conceived it impossible that his companion could have fallen asleep in that situation; his uneasiness became insupportable; he went to the bed, and found his friend lifeless!

Mr. Craighead's feelings, as may well be imagined, now entirely overpowered him, and the dreadful fact was disclosed; their agitation was extreme, and it was far from being alleviated when every attempt to restore animation to the thoughtless young man proved abortive. As soon as their confusion would permit, an inquiry was made after the original corpse, and Mr. Craighead and another went to fetch it in, but it was not to be found. The alarm and consternation of the company was now redoubled; for some time, a few suspected that some hardy fellow among them had been attempting a Rowland for an Oliver; but when every knowledge of it was most solemnly denied by all present, their situation can be more easily imagined than described; that of Mr. Craighead was little short of distraction; daylight came without relieving their agitation; no trace of the corpse could be discovered, and Mr. Craighead was accused as the primum mobile of all that had happened; he was incapable of sleeping, and wandered several days and nights in search of the body, which was discovered in the parish of Tealing, deposited in a field about six miles distant from the place from whence it was removed.

It is related, that this extraordinary affair had a strong and lasting effect upon Mr. Craighead's mind and conduct; that he immediately became serious and thoughtful, and ever after conducted himself with great prudence and sobriety.

Such are the particulars of a story, which, however incredible it may appear, I have heard currently reported by many different people, who had no opportunity of hearing it from each other. Since I began to write this paper, I inquired at an acquaintance if he ever heard the story, just mentioning Mr Craighead's name, and the particulars were again repeated to me, such as they were impressed upon my memory twenty or thirty years ago. There seems to be very little difficulty in accounting for the death of the young man, without any supernatural interference; for a combination of compunction and terror might have seized him, (after taking the place evacuated by the corpse,) sufficient to suspend all the functions of life; but the disappearance of the other dead body does not seem to me capable of being accounted for by any natural cause; for it is by no means probable that any present would have had the hardiness to remove it to such a distance, and also subsequent firmness to keep their own secret; we must, therefore, give credence to the agency of some superior being, or disbelieve the matter at once.

Email ThisBlogThis!Share to TwitterShare to FacebookShare to Pinterest
Labels: Bad Bad Ideas, really putting way too much fun back into funeral, wakes