What's summer fun without a family of lucky black cats? 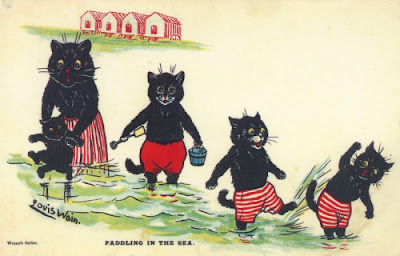 A miniature "book" by Charlotte Bronte goes back home.

Some Nigerian bronzes are going back home.

The lives of lower and middle-classes in Pompeii.

There may be buried treasure under Portland, Oregon.

The sinking of SS Princess Alice.

A brief history of lipstick.

A work of fiction that was a bit too realistic.

Crime and mystery on British railways.

The ancient people of the Amazon.

A widow's ingenious way of dealing with a deathbed promise.

How a Sultan's skull wound up as part of the Treaty of Versailles.

A unique way of remembering a lost soldier.  This is my favorite story from this week.

In which Andrew Carnegie tells a joke.

The legacy of an amateur glaciologist.

An Irish girl's disappearance.  (This is one of those where it's pretty clear what happened, but nobody can prove it.)

A family claims they were driven from their home by poltergeists.

The birth of bird-watching.

No, I do not want to upload my brain to a computer.  My life is weird enough already.

The hoax that inspired "Frankenstein."

Some executions of women in Early Modern England.

A treasure trove has been recovered from a 17th century shipwreck.

The beginning of the end for Sir Robert Walpole.

Reporting the fall of Richard II.

Explorers were once big on "portable soup."

The grim side of railway work.

When the Thames was a "zombie river."

Another of the Salem witches has been cleared.  Albeit a bit late in the day.

The members of Led Zeppelin were an unpleasant lot, even by rock star standards.

The bizarre resolution to a missing-persons case.

That's it for this week!  See you on Monday, when two young men stage a practical joke during a wake, and things do not go as planned.  To put it mildly.  In the meantime, here's the late Judith Durham.  I love her voice.