The Strange Company staff thinks that life's a beach! 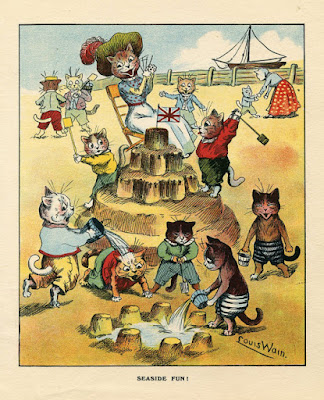 The female cyclist and the Massachusetts Wild Man.

Shorter version: Scientific researchers have done some of the most damn fool things.

How the executions of Thomas Burdet and George, Duke of Clarence were linked.  Or maybe not.

How a sneeze led to the creation of the James Bond theme.

The 1778 Battle of Ushant and the French Revolution.

The women warriors of Dahomey.

Evidence that humans were in North America a lot earlier than we thought.

Hardtack has found an enduring home in Alaska.

A Bronze Age girl who managed to take it with her.

That previous link about how scientists have done some of the most damn fool things?  This one may top the list.  With a hearty dose of child abuse thrown in.

This is why we can't have nice trees.

Researchers have found something really weird living on the bottom of the Pacific Ocean.

When you go out to buy new curtains and wind up owning Stonehenge instead.

A look at Père Lachaise cemetery.

That time the Royal College of Surgeons lost an Andean mummy.

Scholars may have deciphered an ancient writing system.

Science believes that when you're dead, you know it.

"Coffin births": one of the Victorian era's creepier urban legends.

A brief history of the neighborhood paperboy.

Medieval depictions of the Tower of London.

The only woman in the room.

If you think things are bad on Earth now, just wait and see what happens in 20 million years.

Are we the aliens?

A brief history of bourbon.

Phrenology and a murderer.

A restaurant inside of a hot-air balloon, which doesn't strike me as the best idea in the world.

That's all for this week!  See you on Monday, when we'll look at a missing-persons case that in some respects reminds me of the John Iverson mystery.  It was pure coincidence that I happened to come across these two stories at about the same time. In the meantime, bring on the banjos!