While you read this week's links, be entertained by the Strange Company Orchestra! 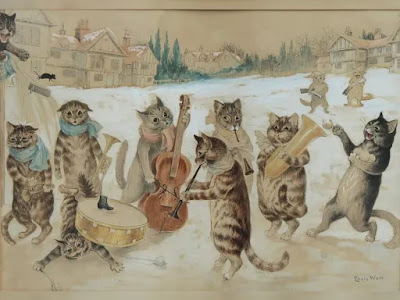 The fateful silver casket of Mary, Queen of Scots.

The oldest city in the New World.

One of the last "fireship" attacks.

The shortest war in history.

That time blimps were used to fight a duel.

The man who discovered Troy, and wrecked it in the process.

This Week in Russian Weird looks at an...unusual view of world history.

The mysterious petroglyphs of Dighton Rock.

A lonely Japanese writer in London.

The Brazilian revolution of 1848.

A guy who really, really wanted to be Consul of Baghdad.

A gourmet cat in Brooklyn.

Some surprises in old documents.

A brief history of the Blue Plate Special.

The mystery of the disappearing observatory.

The Flying Dragon of Death!

The midwife's ghost and a secret burial.

How Shirley Temple went from child star to diplomat.

The secret gardens of Spitalfields.

Yet another trunk murder.

Victor Hugo as a political symbol.

That wraps it up for this week!  See you on Monday, when we'll look at a mysterious series of poisonings.  In the meantime, bring on the marimbas!