This Friday the 13th Link Dump is hosted by one of our Lucky Black Cats! 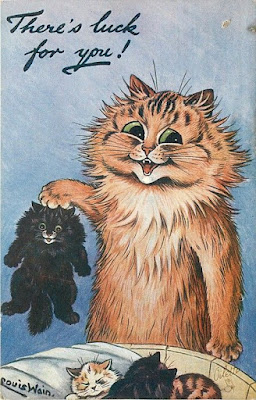 What the hell were the Roman dodecahedrons?

I guess it's not surprising to learn that North Korean music is really weird.

So is the music on Mars' moon.

The Case of the Camberwell Ghost.

The man who feels no pain, and why that's a tragedy.

Our planet is full of mysterious blobs.

In search of a six-fingered civilization.

A corpse behaves in an unseemly manner.

The making of "Exile on Main Street."

A guy in Turkey has an Iron Age complex under his house.

A new exhibition about the opening of Tutankhamun's tomb.

Napoleon and the Battle of Friedland.

The king of Ohio's body-snatchers.

The last British peer to be hanged for murder.

A reality show based on "Lord of the Flies."  No, really, someone thought that would be entertainment gold.

England's cost of living crisis in 1800.

The Gardener of Hoxton.

The use of footprints in witchcraft.

The disappearance of the USS Cyclops.

Some weird ways people died in the 19th century.

Jimmy Page and the Great Pyramid.

The saga of Mike the Headless Chicken.

The theory that Stonehenge is a recycled Welsh monument.

That's all for this week!  See you on Monday, when we'll look at a woman's unusual career.  In the meantime, here's some early Sinatra.