Enjoy the Link Dump, but be aware that the Strange Company HQ staffers are on the war path today. 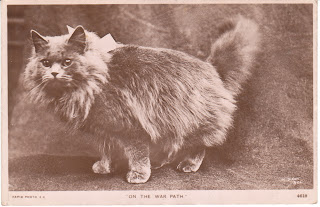 The life of Marguerite of Provence, Queen of France.

In which Mario Puzo and Frank Sinatra have a less-than-cordial chat.

In which we learn that T.S. Eliot and Groucho Marx were pen-pals.

The melancholy of phone boxes.

A modern history of the Loch Ness Monster.

The possible origin of the "Wow!" signal.

A look at library cats.

The paranormal side of an English village.

I don't get car sick, but I still wouldn't drive on this road.

A look at when Manhattan had country estates.

An unsolved murder in Finland.

Another one for the "pushing back human history" file.

It's no joke that you really shouldn't steal from Indian temples.

An ancient forest has been hiding inside a Chinese sinkhole.

Related: we may not be our planet's first advanced civilization.

Two newspapers get into a spat.

The Society of the Double Cross, and tales of hidden treasure.

A death on Hackney Marshes.

The men who revolutionized choral singing.

The ongoing mystery of crop circles.

The "Bloodhound of the Far West."

A review of a new book about Madeleine Smith, one of Scotland's luckiest poisoners.

That's all for this week!  See you on Monday, when we'll look a mystery set in Edinburgh Castle.  In the meantime, here's what happens when Bach meets heavy metal.