Everyone here at Strange Company HQ wishes you all a Happy New Year! 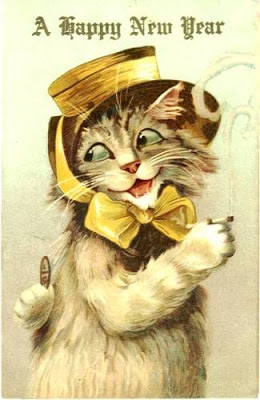 Where the hell was Queen Elizabeth born?

Who the hell was this man who fell from the sky?

A Christmas party turns into a brawl.

Scientists are having a lot of fun with ancient head lice.

A Victorian scrapbook wishes you a happy new year.

There's a Louis Wain exhibition that can be seen online.

Next time you go bar-hopping, take along a hamster.  They can drive you home.

Some possible new clues relating to the "Princes in the Tower."

To me, this story has an uncomfortable "I Have No Mouth, and I Must Scream" vibe to it.

The graves of the "amber elites."

Why we count down to the New Year.

So maybe Elizabeth Bathory wasn't that bad after all.

A recently discovered birch bark letter from the 12th century.

A murder where--rather late in the day--they discovered they had hanged the wrong man.

Photos of the relics of Old London.

And that's the final Link Dump for the year!  I'll be back tomorrow, with my annual look at the top ten posts from the past twelve months.  So long, 2021.  Be sure to let the door hit you on your way out.