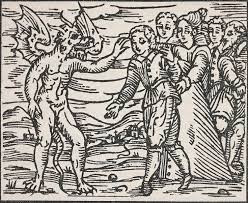 As I have mentioned before, I have a great fondness for Weird Wills.  I have found a great many of them, but I believe this is the first where the chief beneficiary is Satan.  The “St. Johns Herald,” May 26, 1892 (via Newspapers.com):

There is but one spot on the earth's surface, as far as "Ye Curious Man" knows, that has been really and truly willed, deeded and bequeathed to his Satanic Majesty. This sometime-to-be sulphurous spot lies four and a half miles south of Helsingfors, Finland.

A few years ago, Lars Huolarinen died in the little town of Pielisjarvi, in the above named country, leaving considerable property in the shape of real estate. How he had come into possession of so much land no one seemed to know, but as he was a very bad citizen it was generally admitted that he was in league with Wihtahausa (the devil), and that they had had many business deals with each other. This somewhat startling opinion was verified when old Huolarinen died, for, upon opening his will, the Magistrate found a certified warranty deed inclosed therein which deeded to the devil all of his (Huolarinen's) earthly possessions. The will was to the same effect.

The family have repeatedly tried to break the will, but so far have been unsuccessful; thus the records plainly show that his Sulphuric Majesty has a legal right and title to some excellent grounds in the near vicinity of both Helsingfors and Prielisarvi.

The simple people of the neighborhood have changed the course of a road which formerly skirted the Huolarinen homestead, and declare that they would not enter upon the possessions of Satan & Co. for all the money that three such estates would bring. Although no living person has passed the threshold since the old man died, the mansion is said to be brilliantly lighted every night, and many curious stories are told of the unearthly frolics the devils have on this their duly known landed possessions.

So if you’re ever in that part of Finland, enjoy your vacation in Hell.