This week's Link Dump is sponsored by the Strange Company Yacht Club! 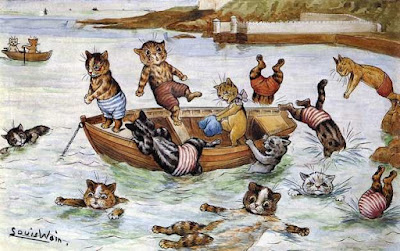 Why the hell did so many Roman Emperors die violently?  Just do the math!

Afraid of witches?  We have a cake for that.

In which Michelangelo writes a poem crabbing about painting the Sistine Chapel.

The County Clerk's office wants people to get married.

We're starting to know how little we know about ancient humans.

The days of professional scissor grinders.

The families who escaped East Germany in a hot air balloon.

Eyewitness accounts of the bombing of Britain.

The legend of Mother Shipton.

In defense of George III.

A ghost in Bedford-Stuyvesant.

Two cases of girls killed by their fathers.

In which Harry Houdini gets swallowed by a sea monster.

Some former Air Force officers are claiming that UFOs are messing with our nukes.

The mystery of the Pakistan mummy.

The diplomat who saved people from the Nazis.

A ghost in the post-mortem room.

Are young British women being "spiked?"

The lore of keys.

Turning a bunch of skulls into a "contemplative experience."

Was the Jacobite Earl of Mar a secret agent?

Some tips on how to avoid being buried alive.

Yes, cats can see ghosts.  I know this for a fact, because I have a ghost cat in my home, and my (live) ones see him all the time.  Hell, I saw him the other night.

A brief history of the werewolf.

A brief history of wartime counterfeiting.

Al Capone still has his fans, for some reason.

The evolution of Victorian fashion.

The mysterious disappearance of Masterpiece the Poodle.

Old London as seen from the air.

A double murder in Michigan.

The mystery of the Barabar caves.

More on the controversy over how to put milk in tea.  And here's why the Brits put the milk in at all.

A strange plane crash in the Andes.

Elizabeth I and Parliament.

The strange case of the Ourang Medan.

A look at the short life of Stephen Crane.

A visit to Jervaulx Abbey.

That time the Earth flipped on its side.

The most haunted places in Los Angeles County.

Italy and the Battle of Britain.

That's it for this week!  See you on Monday, when we'll look at a Halloween murder mystery.  In the meantime, here's an oldie from the glory days of Stiff Records.  (Bonus points if you remember Stiff's very NSFW slogan.)