Now that all the posts for this week have been completed, the Strange Company staff is getting ready for the weekend. 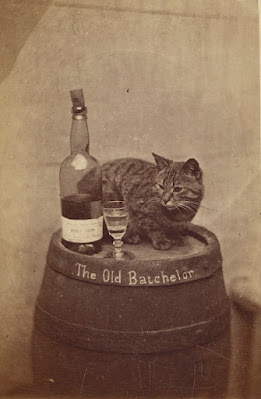 The mystery of Easter Island writing.

A house that really let a burglar down.

It says something about Beate Uhse that being a WWII pilot was the least interesting thing about her.

A greengrocer stands trial for murder.

The biggest whiskey-drinking contest ever.  Warning: just reading about it may make you tipsy.

That time New England got hysterical about vampires.

A new film is based on a real-life medieval rape trial.

In which we learn that Winston Churchill was a firebug.

The Prince of Joinville: an artist and a sailor.

The diary of a "lumber Jill."

The world's most expensive garden gnomes.

A tale of a funeral coach.

An ancient luxury toilet in Jerusalem.

The Jacobean trade in peerages.

When Oscar Wilde was a golden boy.

The Demon Wall of Norway.

The shipwreck and the weird sea creature.

Nothing to see here, just some unknown Thing sending radio waves from the center of our galaxy.

On the difficulty of writing a biography of a court fool.

A triple murder in 1924 Pennsylvania.

A disappearance in the Arizona desert.

The murder of "Joe the Quilter."

In which a cobra becomes a murder weapon.

There was a mass extinction about 30 million years ago, and we're only now finding out about it.

In which a woman wakes up to find she's sharing her bed with a space rock.

A look at an 18th century debtor's prison.

The oldest known footprints of pre-humans.

Meet the dog who just got into the Guinness World Records.

That's it for this week!  See you on Monday, when we'll look at a short, but very weird ghost story.  In the meantime, our Strange Company HQ staff is here to entertain you: