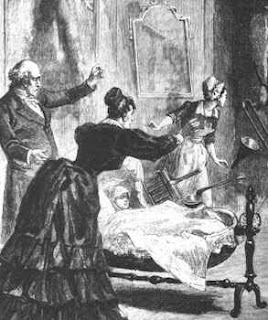 This Halloween ghost story with a twist appeared in the “Caledonian Mercury,” November 8, 1828.  (Via Newspapers.com)

A spiritual visitant, as was supposed, for some days lately afforded subject of wonderment to the natives of the port of Leith. In a house in the Kirkgate, there was heard the  most appalling and unearthly noises, succeeded by the tumbling-about of articles of furniture, after which a momentary, calm would ensue; but ere the inmates could set all to rights, the uproar would recommence with, increased vigour, yell following yell, and crash succeeding crash, till confusion was worse confounded in the devoted domicile. Friday se'en-night, being the high festival of spirits, witches, &c. (Halloween) the Leith ghost is said to have exceeded all former exploits. These cantrips, it is hardly necessary to add, occurred during the night; and when a neighbour, more venturous than wise, volunteered his service to assist in laying the goblin, he received a sound buffeting from an invisible but powerful arm. We have heard that ghostly advice was called in by the alarmed inmates, but without effect: for while two clergymen were engaged in devotions, they were assailed by a shower of missiles, one of which, a table knife, stuck into the floor close by them, but this of course, needs confirmation.  Certain it is, however, that crowds collected around the house where these doings were going on night after night  and the attention of the Police was at length directed to the subject. These guardians of the night were not to be frightened by deeds of darkness like ordinary daylight mortals; their presence soon laid the spirit, while their sagacity shortly discovered the mischievous goblin in the person of a female member of the house, who, in conjunction with a professor of the conjuring art, had been endeavouring to practice on the fears of her father, for a sinister purpose in which she and her assistant were mutually interested. She has, we are told, been sent to jail for 30 days.

Assuming this solution to the mystery is true, and this woman wasn’t being used as a scapegoat for a genuine poltergeist infestation, I'd like to know what that “sinister purpose” was.