We have all the news! 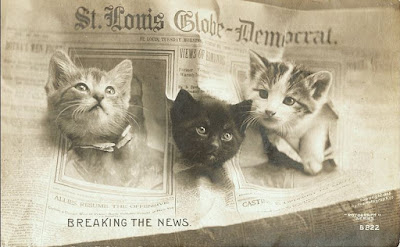 The hazards of medieval high fashion.

The inexplicable disappearance of a woman and her dog.

The Brandon family and Richard III.

A look at the "Croglin Vampire."

The siege of Constantinople in 860 AD.

The discovery of a "miniature Pompeii."

When it was considered normal to reopen graves.

From bigamy to umbrella fighting.

I've said this here before: ravens are damned smart.

The vegetable that conquered the world.

Notes from a cholera outbreak in Glasgow.

An alchemist prince and his anatomical machines.

Does your salad feel pain?

A father's love goes a bit too far.

An interview with a Tower of London ghost.

New discoveries in the tombs of Saqqara.

The gypsy hostess of Greenwich Village.

Humans may have arrived in the Americas much earlier than we thought.

Maoris may have visited Antarctica in the 7th century.

Reflections on the Indian Political Service.

In case you weren't aware of it, Dashiell Hammett was a real swine.

A watchtower to defend against bodysnatchers.

The General Slocum Disaster of 1904.

The Iron Age was a great time to be a chicken.

Catherine de Medici was a wicked chess player, which doesn't surprise me.

The largest known geoglyph has just been discovered.

A "weight of grief" leads to murder.

That's all for this week!  See you on Monday, when we'll look at a young man's weird death.  In the meantime, we aint' going nowhere.