Now that this week's Link Dump is completed, the staffers at Strange Company HQ plan to take things easy over the weekend. 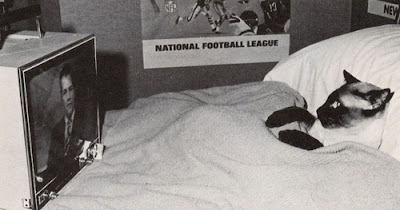 Watch out for those haunted wailing waterholes!

The ancient grave of a shackled skeleton.

Humans were probably in the Americas a lot earlier than we thought.

The woman who went from socialite to nun.

Yet another case of a woman killed by a rejected suitor.  (True crime is full of these cases. They're second only to a woman disappearing, and the husband/boyfriend telling police, "We had a fight, and she just walked out.  Golly, I have no idea where she is. Sure, she didn't take any money, clothes, ID, or credit cards, but she's out there alive and well someplace.  Honest.  Cross my heart.")

The case of the mirrored mansion.

The history of a royal tiara.

A cat who was the feline equivalent of Michael Malloy.

The argument that they're not aliens.  Spoilsports.

We're at risk of losing knowledge about medicinal plants.

A newly discovered crater in Greenland.

The beginnings of the camping holiday.

According to the National Geographic Society, we have a fifth ocean that nobody's noticed before.

A look at sunken cities.

An abusive husband comes to a bad end.

This week in Russian Weird: creatures frozen in Siberia for 24,000 years come back to life.  Then they read a few 2021 news headlines and begged to be put in the freezer.

The sounds of 17th century plague.

If you're a fan of Kentucky Fried Chicken, thank Queen Victoria and an evil sea captain.

The long history of Lady Godiva and Peeping Tom.

The disappearance and reappearance of Captain Rehrer.

The man who forged paintings just too well.

The first woman to hike the Appalachian Trail.

A look at Prince Eugen of Savoy.

The value of echolocation.

Some interesting items from the British Museum.

One of the most famed examples of someone surviving being hanged.

The girl who claimed to live twice.

The notorious "poisoner of Paris."

A handy guide to the amount of money Burke and Hare made from serial murder.

All you need to do is hear the magic words, "Metal in her mammaries," and you know that Thomas Morris is blogging again.

A Duchess accused of witchcraft.

That's it for this week!  See you on Monday, when we'll look at a burial gone weird.  In the meantime, here's a bit of brass.