Newspaper Clippings of the Independence Day

For some people, the holiday goes straight down the toilet.  Literally.  “The Pantagraph,” July 5, 1992:

Elaine Sims isn't sure anymore what to expect when she walks out to get the newspaper in the early morning hours.

One morning in March when she went out of her home at 224 Leland St, Bloomington, she was greeted by two toilets in the flower box. One was white with plastic flowers, the other black with plastic flowers. Each was decorated with crepe paper and, of course, toilet paper.

She knew immediately that the "gift" was compliments of her brother and sister-in-law, Robert and Shaun Hermes of Hudson, and her sister and brother-in-law, Tim and Lisa Legner of Bloomington.

She took it in stride.

"It provided comic relief at the time," she said, because her father was in the hospital and quite ill.

But after yesterday, Mrs. Sims is trying to figure out an appropriate method of revenge for her dear relatives.

Yes, it happened again. When she went out to get the newspaper about 7 a.m. yesterday, there was yet another toilet. This one was appropriately decorated for the Fourth of July - complete with red, white and blue stripes, stars and a flag cemented in the toilet bowl.

Mrs. Sims said her brother "is extremely creative and artistic, and his style is reflected in our toilet." 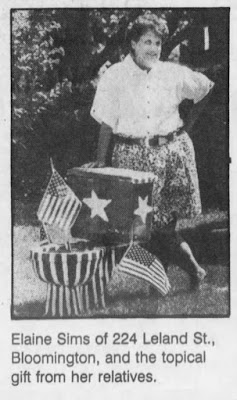 Mrs. Sims laughs when she says, "our family is warped and sick," while she and her husband are "quiet, sweet," she adds. However, she said, "there will be revenge."

It seems that his offspring plan to carry on that family tradition.

This story, Mrs. Sims said, "is to be continued."

Let us all be thankful that I could find no more about this family.

As I have mentioned before, homemade explosives have provided me with no end of blog material.  The “Moline Dispatch,” July 6, 1986:

MELBA, Idaho (UPI) - A Fourth of July practical joker trying to blow up a church float depicting the space shuttle ignited the blast prematurely Friday and caused a $100,000 fire that gutted a warehouse, police said.

Carl Hint, 24, told police he intended to play a joke and blow up the float during the annual Fourth of July parade in Melba, about 25 miles southwest of Boise, Canyon County Sheriff Bill Anderson said.

Anderson said Hinz told police he entered the Security Heating and Air Conditioning warehouse, where the Melba Catholic Church's float was stored. Hinz said he planned to put black powder and balloons filled with acetelyne and oxygen inside the space shuttle float and then blow it up during the parade with a radio detonator, Anderson said.

But the detonator malfunctioned when Hinz was installing the explosives and they were ignited, Anderson said. Hinz was taken to Mercy Medical Center with second degree burns over 20 percent of his body. Anderson said the blaze caused at least $100,000 in damage to the warehouse, scorched another building and burned several cars.

Yet another “joke” that wound up in a courtroom was reported by the “Buffalo Times,” July 7, 1906:

Special to THE TIMES. FREDONIA. July 7. Joseph Callahan started a John Doe proceeding Thursday before Justice H. C. Drake, which is the outcome of an ante-Fourth of July practical joke, in which Callahan was injured about the right hand by the explosion of a cannon cracker which was thrust into his hand by a crowd of young men Tuesday night. Callahan was taken into a doctor's office by the men and had his injuries dressed and they thought the matter ended until the service of the subpoenas. Thus far the proceeding has not indicated who was the active party in the affair.

And, finally, a case where the tables were satisfyingly turned.  The “Chicago Tribune,” July 5, 1891:

There is undoubtedly more practical joking on the Fourth of July than on the first of April, and whatever may be the opinion regarding practical jokes in the abstract, few there be that having arrived at the age of discretion will not agree that the typical Fourth of July practical joke is rarely humorous, especially from the victim's point of view. There is a young man in Chicago who may be called Smith, to whom the idea of a practical joke on some other fellow is excruciatingly funny, or rather was so until a late hour last night. There is reason to believe that he has undergone a change of opinion on the subject.

A few days before the Fourth the young man conceived a brilliant idea. He bought a mammoth cannon cracker, over a foot long and several inches in diameter. Then he carefully removed the fuse and the charge, tunneling the gunpowder out and scorching the hole with a red hot wire until the last vestige of the explosive was removed. The big cannon cracker was then perfectly harmless.

He started out early yesterday morning with his big, harmless cracker and a five-cent bunch of little ones. He inserted one of the little ones in the top end of the cannon cracker and dropped into the first saloon. After buying a drink he calmly set the big cracker on the bar and set fire to the fuse.

The bartender crouched behind the bar, frightened nearly out of his wits. Sizz! went the fuse, and the other customers glanced at the big cracker and then scrambled all over each other in their haste to get out of the way before the explosion came.

It came: a puny little pop! and the big cracker turned listlessly over on its side. The bartender peeped out timidly, with a sickly grin, and finally recovered his courage when the joker put the cracker in his coat pocket. Then everybody took a drink at the bartender's invitation.

Strange to say the young man with the cannon cracker successfully played his little joke all day long, from place to place, with the usual accompaniment of drinks on the bartender. But every lane has an end, and every practical joker meets another sooner or later.

Smith had meanwhile accumulated a Fourth of July "jag," which made him an easy victim. Someone who saw him play his little trick went straightway and bought another cannon cracker the same size as Smith's. But he didn't remove the load. He followed Smith.

The opportunity soon came to replace the bogus cracker with the real one. It was the latter Smith drew from his pocket, while he braced himself against the bar and unsteadily touched a match to the fuse. Smith was knocked down in the rush to the door. To this adventitious circumstance he probably owes what remains to him of his physical well-being.

The cracker exploded with a terrific report, shattered $200 worth of glass, for which young Mr. Smith must pay, and incited the proprietor to an assault upon Smith which made him wish he had gone off with the cracker.

That cracker joke will be labeled " dangerous" and hid away in the darkest closet the young man can find when he comes to his senses today.

A happy Fourth of July next week to all my American readers!  At least, we will be happy if we all do the prudent thing and hide under the bed.  For all you know, Elaine Sims' brother may be heading your way with a toilet.