This week's Link Dump is hosted by the League of Suffragette Cats! 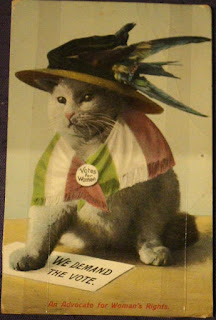 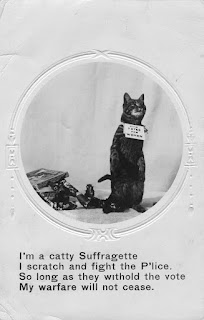 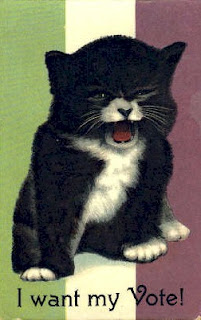 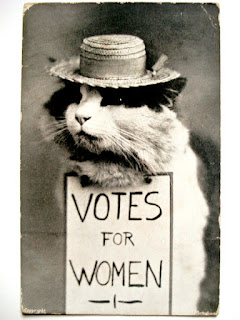 Watch out for the Carmel Mystery Crawler!

A witch with a hell of a kick.

Honoring the astronaut who was once the loneliest person in history.

A diary of the Spanish Flu.

The inspiration for "The Blob."

How to end a church service early.

The murder that launched a thousand songs.

Yet another reason to be thankful for modern sanitation.

Tudor England was more racially diverse than you might think.

The minimum number of people required for humanity to survive an apocalypse.  Assuming, of course, that humanity wanted to survive it.

Seven of the world's weirdest museums.

The argument that Oumuamua was a UFO.

The inventor of jigsaw puzzles.

A look at the aircraft carrier HMS Victorious.

The development of the bicycle.

A look at the first knitting manuals.

Oracles and death gas from a giant snake.

How to be a Mesopotamian king.

The sacred chickens of ancient Rome.

The Queen of Thieves wreaks havoc in the French Riviera.

The remains of a Viking elite.

Cancer has been more historically common than we thought.

The phenomenon of voodoo death.

Getting information during a 17th century plague.

The aftermath of Napoleon's death.

In other news, a Belgian farmer just invaded France.

Plague and a mother's love.

A man writes his own obituary.  And it's a heck of an obituary.

The Psychical Society finds a ghost.

The Stargate of Sri Lanka.

The bluebells of Bow Cemetery.

A breakthrough regarding life on Mars.

Guerrilla warfare in the American Revolution.

A poisoner who didn't get away with it.

An assortment of Victorian go-getters.

I hate to be the one to tell you this, but Robin Hood's arrow was not found in Sherwood Forest.

Disaster and heroism in the English Channel.

A family thought they were getting a patio. They got five skeletons instead.

A possible portrait of Anne of Cleves.

So, in ancient times, Cthulhu was using bones to make self-portraits on the bottom of the sea...oh, never mind.  Just read the whole thing.

The dog who was put on trial for murder.

The whistleblower who is saying...yeah, it's aliens.

That's it for this week!  See you on Monday, when we'll look at an elderly woman's peculiar murder.  In the meantime, I'll leave you with THOSE WIGS.