The Case of the Levitating Butler

A typical morning for a member of the gentry in the 17th century: get out of bed, yawn, stretch, ask the missus how many of the servants died of plague during the night, notice that the butler’s levitating in the parlor again…

The following tale was published by Joseph Glanvill in his influential 1681 book on demonology, “Saducismus triumphatus”:  one afternoon, an Irish gentleman “near to the Earl of Orrery’s seat,” sent his butler to buy cards.  As the servant passed a field, he was puzzled to see a company of people in the middle of the grassland sitting at a table loaded with “a deal of good chear.”  As he approached the group, they rose and invited him to join them.  However, one of the party whispered to the butler, “Do nothing this company invites you to.”

Sensing this was good advice, the butler declined to sit at the table.  Then, the table suddenly disappeared, and the group began dancing and playing musical instruments.  Again, they asked the butler to join their revelry.  When he repeated his refusal, “they fall all to work.”  When working proved no better lure than feasting or dancing, the thwarted company vanished before the butler’s eyes.  The servant hurried home, in “a great consternation of mind.”  As soon as he entered his master’s door, he fainted.  When he came to, he related his unsettling experience to the household.

The following night, one of the company appeared at the butler’s bedside.  The visitor warned that if the butler left the house the next day, he would be carried away.  He obeyed this warning, but towards evening, a call of nature compelled him to venture just outside the threshold, with several members of the household standing guard over him.  The moment he stepped outside, a rope suddenly appeared around his middle and he was dragged off “with great swiftness.”  The others followed after him as quickly as they could, but they were unable to overtake him.  When they saw a horseman coming their way, they “made signs to him to stop the man, whom he saw coming near him, and both the ends of the rope, but nobody drawing.”  When the horseman grabbed one end of the rope, the other end gave him a “smart blow” across his arm.  Despite this, he was able to halt the butler’s spectral abduction and return him home.

When the Earl of Orrery heard of these peculiar events, he had the beleaguered butler sent to him.  The servant mournfully told him that “his spectre” had visited him again.  He was to be kidnapped again that very day, and there was nothing anyone could do to prevent it.

The butler was kept in a large room, with many people around to protect him, including two bishops and a neighbor, “the famous stroker, Mr. Greatrix.”  [Note: Valentine Greatrakes was a renowned Irish faith healer, known as “The Stroker.”]

All was quiet for most of the day, but that afternoon, the butler was seen to rise in the air.  Although several of the men grabbed his shoulders and tried weighing him down, all their strength was unable to anchor him.  The poor butler was carried over everyone’s heads for a considerable period of time.  When he eventually fell to the ground, his companions were able to cushion the descent enough to prevent any injury. 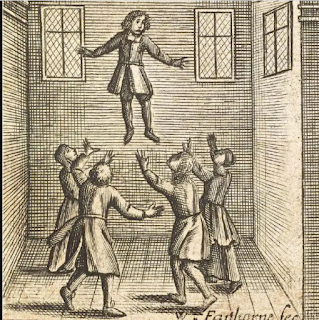 The rest of the day passed without further incident.  The Earl ordered two of his servants to spend the night with the butler, in case there was any new trouble.  The next morning, the butler informed the Earl that “his spectre” had visited him during the night.  He tried to awake his bedfellows, but was unable to stir them.

The “spectre” told the butler that he had no cause to fear him.  He explained that he was the man in the field who warned him against the rest of the company.  If the butler had not listened to him, he said, the servant would now be entirely under the company’s power.  The ghost assured the butler that there would be no more attempts to abduct him.  As he had heard the butler was “troubled with two sorts of sad fits,” he presented a wooden dish containing a “grey liquor,” and told the servant to drink it.

When the butler refused, the wraith grew angry.  But as he had “a kindness” for the butler, he advised him to take plantain juice.  It would cure one of his “fits,” but he was doomed to carry the other to his grave.

“That of the leaves or roots?” the butler asked.  “Roots” replied this spectral dietitian.

The ghost asked whether the butler did not know him?  When the servant replied in the negative, his visitor explained, “I have been dead seven years, and you know that I lived a loose life.  And ever since have I been hurried up and down in a restless condition with the company you saw, and shall be to the day of judgment.”  He added that if he had acknowledged God, he would not have “suffered such severe things.”  The apparition concluded, “You never prayed to God that day before you met with this company in the field, and also was then going about an unlawful business.”

On that chiding note, the spirit vanished.

Perhaps the strangest part of our little tale is that it is so well-attested.  “Mr. Greatrix,” Lord Orrery, and the numerous other eyewitnesses to all this splendid nuttiness repeatedly affirmed every detail, flying butlers and all.

I really do not know what to say about the whole matter.  Except that if you should ever happen to come across a bunch of strangers having a dinner party in the middle of a field, it would be best to run in the other direction.

They might turn out to be very Strange Company indeed.