Because everyone loves heartwarming reunion stories, I present this news item from the May 18, 1990 “Miami Herald”:

SYDNEY Australia — Two Australian fingers have been returned to their owner after spending the last 23 years hidden in a jar. But another resident of Bendigo in Victoria is contesting ownership telling police he is sentimentally attached to the fingers he used to keep in a matchbox.

The tale of two digits has preoccupied Bendigo since Sunday when a young couple walked into the former gold rush town’s police station holding a jar containing two fingers pickled in methylated spirits. Senior Sgt. Graham Aitken said they found the jar when cleaning out their garden shed.

“The fingers had obviously been there a while so we ran a piece in the local paper and the next morning this bloke comes in and says they’re his,” Aitken said.

But a glance at Michael Ellis’s fingers revealed he had the full set. He still insisted he was the rightful owner.

“He said that 23 years ago he had been working in a garage when a chap ran in after chopping his middle and fourth fingers off in a tractor accident.

“They took the guy to hospital but at the end of the day he (Ellis) decided to go and find the fingers.”

Ellis at first kept the fingers in a match box and used to scare girls in bars with them. But one day the fingers’ real owner accosted him and asked for them back.

“He (Ellis) denied he had them but when he got home he dug out an empty jar, sealed the top and hid them away,” said Aitken.

The plot thickened 10 years ago when someone stole the jar from Ellis. How it ended up in the garden shed remains a mystery.

“He said he wanted them now because of their sentimental value,” Aitken said.

“We refused but he said he was going to contact the tractor driver and ask his permission to keep them.”

On Thursday morning the unnamed tractor driver himself walked into the police station and claimed the fingers.

“It’s been a bit of a laugh” said Aitken “But it’s a nice change to have a happy ending.”

A follow-up story in the May 23, 1990 “Sydney Herald,” carried an interview with the rightful owner of these precious pickled digits: 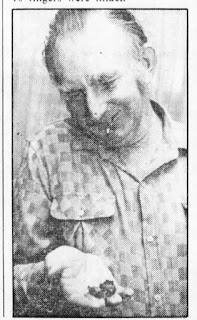 His fingers now sit on top of his china cabinet, after being found in a garden shed last week. They are "a light chocolate colour" and look like pieces of wood until you see the fingernails, said Mr. Cary, 52, who lives in Prairie, north of Bendigo.

"But there's no doubt they are mine," he said. "You can see where they've come from--the tear matches up with the stumps."

Mr. Cary said the fingers had become a "big talking point". He last saw them in 1967 when they were sheared off in an accident, as he sat on the back of a towing truck. They were picked up by a 14-year-old schoolboy, Michael Ellis, who preserved them in a jar of methylated spirits.

Ten years later they were stolen from Mr. Ellis and were not seen again until they turned up mysteriously in the shed of a house in Bendigo.

Much of the methylated spirits was gone and the fingers had darkened and become mummified. When they were given to police, Mr. Ellis, now 37, claimed them, saying they had sentimental value. Police rejected his claim because his 10 fingers were intact.