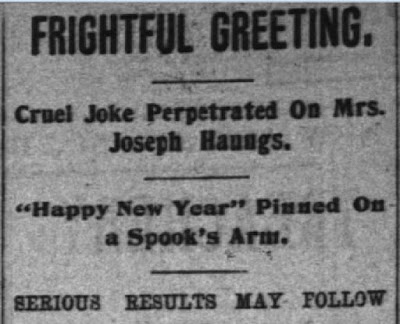 
Mrs. Joseph Haungs, wife of the well-known saloon-keeper at Seventeenth and Market streets, is lying in a serious condition at her home as the result of a joke perpetrated by some unknown person. Mr. Haungs is very indignant, and declares if he finds the person he will make it warm for him. Mrs. Haungs is suffering from nervous prostration.

Mr. and Mrs. Haungs have been married only about five months, and during that time it has been the wife's custom to remain with her husband until he balances his accounts for the day, and this usually takes him until 11 o'clock or after. Friday night she remained with him until about 10:30 o'clock, when she became sleepy and told him she was going to her room. Haungs and his wife live over the saloon. Feeling secure because of the knowledge that her husband was within sound of her voice, she opened a rear door and started up the steps. The rear hallway is usually dark and she hurried up the back stairway. Haungs proceeded with his figuring for several minutes, when he was startled by hearing a piercing scream. A moment later he heard his wife stumbling down the back steps. He ran to the door and threw it open. Haungs was shocked to see his wife deathly pale.

"What is the matter?" he asked excitedly.

"Great heavens!" exclaimed the wife, "there is a strange woman up-stairs. Oh, she is so pale and so frightful looking." And then the woman almost lost consciousness. When she had recovered sufficiently she said the woman was tall, wore ordinary clothes and was very pale. She appeared very unnatural, she said, and her features were set like one dead. Haungs was mystified. He knew full well that he had taken the precaution to lock all the rear doors, and he was sure that no one had entered the house through the bar-room. But he decided to investigate the matter and ran up-stairs.

As he reached the top of the steps he was confronted by a woman staring at him and standing motionless. He stood still for a moment, and then summoning all his courage he rushed into the room. But the woman did not stir, and this caused him some fright. On reaching the side of the figure he recognized a false face, and then began to suspect that some one was either playing a joke on him and his wife, or else the person was disguised so she or he could not be recognized. With a sudden resolution he grabbed hold of the figure and the supposed woman tottered and fell heavily to the floor. Then it was that he saw the whole affair was a joke. Haungs searched the house to find the perpetrator. It would not have been well with him had he been found, for Haungs was determined to teach him a lesson he would not forget in a life-time.

On examining the object of his wife's fright Haungs found that some one had stuffed an old calico dress and had put a false face on the figure. They had also tied a hood over the head, and stuffed gloves answered the purpose of hands. A pair of shoes sticking out from under the dress completed the hideous looking object. On one arm was pinned a piece of paper with the words, "A Happy New Year."

Mrs. Haungs was compelled to take to her bed, and the least noise causes her to start with fright. Haungs says he intends to investigate the matter, and he expects to have the guilty person duly punished. He says he has a clew and that he believes he has the right party under surveillance.

You may recall that one of my annual roundups of Christmas clippings contained a "Courier-Journal" story dealing with a "joke" gift of a shroud.

Louisvilleans in the good old days had interesting ways of celebrating the holidays.
Posted by Undine at 5:02 AM