In Which Mr. Adamski Weirds Everybody Out 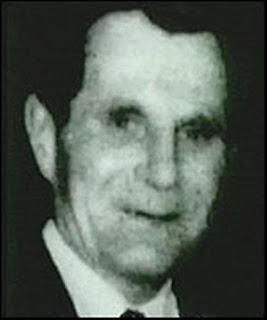 As regular readers of my blog (all three of you) may have noticed, I have, without really intending to, built a subcategory of stories of people who are found strangely, inexplicably dead. All these cases are puzzling, but there are few that top the end of an otherwise completely normal man named Zigmund Adamski.

In fact, some will tell you his death was positively otherworldly.

Zigmund Jan Adamski was a Pole who was forced to flee his country during WWII. He found refuge in Tingley, Yorkshire, where he became a coal miner. He married in 1951. Sadly, before many years passed, his wife, Leokadia ("Lottie") became an invalid. Zigmund was devoted to his spouse, and naturally wanted to spend as much time caring for her as possible. Additionally, his own health was poor, so in 1980, the 56-year-old applied for early retirement. He received word that his application had been rejected. Soon afterward, the company made a review of this decision, and this time his application was accepted. However, by the time this reversal was made, Mr. Adamski's employment status was, to say the least, irrelevant.

June 6, 1980 began as a perfectly normal day for Zigmund. He was, of course, displeased with his company denying him early retirement, (the company's change of heart had yet to be announced) but he showed no sign of being unusually upset. A cousin and her son were visiting the Adamskis from Poland. The trio spent the day visiting the local shops, then returned home for a meal of fish and chips. Adamski was looking forward to the following day, when he was going to give away his goddaughter in marriage. He even had prepared a speech for the occasion.

At three-thirty in the afternoon, Adamski told his family he would go buy some potatoes. The shop was only a few hundred yards away, so he expected to be gone just a short time. He left with nothing but his wallet.

Adamski never made it to the store. In fact, he was never seen alive again.

When he failed to return home that evening, Leokadia called the police. Law enforcement made extensive inquiries, and local newspapers also publicized the disappearance, but no one could offer any information. All anyone could say was that one moment, a neighbor saw him walking in the direction of his neighborhood store, and the next moment...he was gone.

On the afternoon of June 11, Trevor Parker, the son of a coal merchant in Todmorden, a town some 25 miles away from where Adamski was last seen, arrived at his father's yard. He was stunned to find a man's body lying in a hollow at the top of a 10 foot high pile of coal. Adding to his confusion was the fact that he had already been at the yard that morning, and was certain the body and not been there at that time. Between his two visits, the gates had been left unlocked in case any deliveries arrived.

This was the last sort of delivery he had been expecting.

After recovering from his shock, Parker summoned police and an ambulance, even though it was immediately obvious that the man was quite dead. Investigators were quickly able to establish that the body was that of the missing Zigmund Adamski.

Unfortunately, that was the only question in this case anyone was able to answer. The more everyone studied the business, the weirder it got. For one thing, how did he get up there? It would have been extremely difficult for anyone to climb up the coal pile, particularly since recent rains had left it greasy and slippery. For someone with Adamski's health issues, it would have been impossible. Although the body was still wearing the jacket Adamski donned before leaving his house, his shirt was missing, along with his watch and wallet. (Those items were never found.) There were strange oval burn marks on the back of his head, neck, and shoulder.

The autopsy established that Adamski died on the day his body was found, sometime between 11:15 am and 1:15 pm. There were no physical injuries found, aside from those odd burns. The pathologist thought they were caused by some sort of corrosive substance, but he could not say what it had been. The burns had been covered with a gel which the doctor was also unable to identify. All he could say was that Adamski probably died of a heart attack. "Natural causes" was the final verdict in this most unnatural case.

This, of course, did nothing to explain what happened to Adamski. Where was he during the days between his disappearance and his death? His body showed only one day's growth of stubble, so he had obviously been shaving (and presumably eating and drinking) somewhere, but no one reported seeing him. Was he voluntarily hiding all that time? Had he been kidnapped? In either case, how in the world did he wind up on top of a pile of coal? The coal yard was in a busy area, but on the day his body appeared there, no one saw or heard anything unusual. The coal pile showed no sign of footprints or other indentations to indicate what would have been a very arduous climb. And if he had been murdered, this would have been a remarkably stupid place to leave the body.

To date, no one has been able to offer a definitive answer to this mystery. So weird was Adamski's death that it has been linked to--wait for it!--aliens. In the weeks before and after Adamski vanished, there were a number of UFO sightings around West Yorkshire, particularly in Todmorden, where his body was found. Alan Godfrey, one of the policemen who were called to the coal yard by Trevor Parker, reported a most peculiar incident on the night November 28, 1980. As he was driving on patrol, he saw a large object hovering on the road ahead of him. He stopped his car and tried calling the station on his car radio and mobile walkie-talkie, but could not get through. The next thing he knew, he was 100 yards further down the road from where he had stopped. He later found that a substantial amount of time had passed, of which he had no recollection. He later had himself hypnotized, in an effort to learn what had happened during this "missing time." In his trance, he described being taken inside the UFO and examined by the extraterrestrials inside the craft.

Was this, some have speculated, what had happened to Adamski? Did a passing UFO scoop him up to use as a human guinea pig? Did he die of a heart attack during the examination, with his alien captors disposing of the corpse by simply dropping it on a handy pile of coal?

In 2018, Alan Godfrey spoke to the "West Yorkshire Examiner" about the mystery. He was still haunted by the sight of Adamski's corpse. "Those eyes were staring up at me...They were wide open. He had a look of someone who had seen something or someone that had scared him to death. Something or someone put him on top of that pile of coal. And something scared him to death." He added that he "can't rule out," the alien abduction theory.

Such a scenario is, of course, completely outlandish. The unnerving thing is that no one has come up with a better explanation for the death of Zigmund Adamski.
Posted by Undine at 4:43 AM