In Deep Water: The Last Dive of the Lonergans 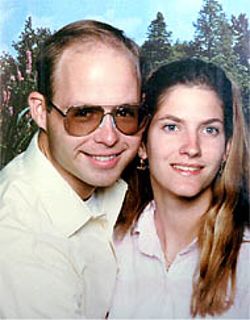 On Sunday, January 25, 1998, 34-year-old Tom Lonergan and his 29-year-old wife Eileen were part of a group of 26 passengers who set out in the scuba boat "Outer Edge" for a day of snorkeling at St. Crispin's Reef, a popular dive site off Australia's Queensland coast. The two Peace Corps volunteers had been working as teachers in Tuvalu and Fiji, and were giving themselves a holiday before returning to their home in America.

The Lonergans had both trained as military pilots (although Eileen was a geologist by profession,) and excelled in outdoor activities, particularly scuba diving. They appeared to be happily married, and entirely content with their active and productive lives. In short, they seemed unlikely candidates for either bizarre misadventure or deliberate hoax.

At about 2:30 pm, the owner and skipper of the "Outer Edge," Geoffrey Nairn, stopped the boat at the tip of St. Crispin's, and his passengers all happily dove into the still, beautiful waters. The Lonergans, being fearless and expert scuba divers, told another diver on the trip that they would "go off and do their own thing." The couple swam away on their own, becoming lost to view.

About an hour later, the passengers came back onboard, and the boat headed back to Port Douglas. No one bothered to do a head-count, so it went unnoticed that they were returning with two fewer people than when they left. Tom and Eileen Lonergan had vanished. Incredibly, it was not until the following Tuesday, when Nairn found the pair's belongings--including Tom's eyeglasses and wallet--in his boat's lost property bin, that anyone realized that something was amiss with the Lonergans. Nairn called the hostel where the couple had been staying. The manager said the Lonergans weren't there. He had not seen them for several days, and had no idea where they could be. Nairn immediately called the police, and the investigation into this strangest of missing-persons cases was finally underway.

Sixty hours after anyone had last seen the Lonergans, an air and sea search, which eventually covered 8,000 nautical miles, was begun. No trace of the couple could be found. Of course, after that long a period of time, the Lonergans could have been anywhere--no matter what had happened to them.

It was at this point that things really began to get weird. Two buoyancy vests in perfect condition, a fin, a wetsuit hood, and a diving tank were found on a beach about six miles from Cooktown. The vests were marked with the Lonergans' names.

This find only deepened the mystery. Did the couple remove their equipment in order to commit a joint suicide? Could they have been murdered? And in any case, how likely was it that all these items should just happen to wash up on the same remote beach? Were these items planted--by the Lonergans, or someone else?

At the inquest into the couple's disappearance, one witness suggested that the Lonergans had been killed by a pack of tiger sharks. Others disputed this idea, pointing out that the sharks would have eaten them whole, without leaving any of their equipment behind.

An odd detail was provided by Tom Colrain, the operations manager of the "Outer Edge's" company. He stated that on the night before the ill-fated diving expedition, Tom Lonergan phoned him to ask if the diving boat would be visiting Agincourt Reef. Colrain replied that it would.

Lonergan seemed unaccountably dissatisfied by the news. He repeated the question. Several times, to the point where Colrain became highly exasperated. Gail McLean, who worked for the Cairns Visitors Information Center, testified that Lonergan had called her with a similar question. He asked about a charter vessel called "Quicksilver V." Would it be visiting Agincourt Reef?

When McLean replied in the affirmative, Lonergan showed the same peculiar insistence about this seemingly trivial point. Was she sure the boat would sail to Agincourt Reef? He kept pressing her on the matter until, McLean recalled, "I got my back up and said I didn't care what anyone else had told him, it was Agincourt Reef that 'Quicksilver' visited."

Could it be that the Lonergans had a plan to break away from their group and, for whatever reason, secretly board "Quicksilver?" No one could say.

The strangest testimony of all was given by Jeanette Brentnall, the owner of a Port Douglas bookstore. She was certain that the Lonergans came into her shop...two days after the couple disappeared from the "Outer Edge." Brentnall said they bought maps of the area, as well as postcards. She chatted briefly with the couple, who told her they were from Fiji. She recalled that "The man dominated the conversation...his wife looked pretty subdued."

The inquest heard some ominous-sounding testimony about Tom Lonergan's state of mind before his disappearance. Some acquaintances asserted that he had been suffering from depression and anxiety about the future. On August 3, 1997, he wrote in his diary that he wanted to die. On January 9, 1998, Eileen wrote in her diary that her husband was "ready to die...he hope it happens soon." Elsewhere, she wrote, "Our lives are so entwined now and we are hardly individuals. I am still Eileen but I am mostly Eileen and Tom. Where we are now goes beyond dependence, beyond love." Her diary entries indicate that she did not share Tom's longing for death, and feared he might somehow force her to get "caught up" in it.

The attorney for the "Outer Edge"company--facing quite a bit of heat over Nairn's carelessness about the head-counts--pushed the murder-suicide theory hard. Relatives of the Lonergans, who were calling for Nairn to be charged with manslaughter, were outraged at this line of attack, calling it "wild, unsubstantiated speculation." Family members described the couple as too essentially positive in their thinking to actually act on any suicidal thoughts. Eileen's father insisted that "They were happy young people traveling the world."

The coroner obviously agreed with the relatives. He ordered that Nairn should stand trial. In November 1999, the skipper was acquitted. The issue of just what had happened to the Lonergans was so murky that the jury recoiled from making any definitive ruling on the matter. However, the following year Nairn's company was fined $27,000 for failing to keep careful records of the boat's passengers. Nairn was forced to sell the company in order to pay the fine and his several hundred thousand dollars of legal bills.

Over five months after the Lonergans were last seen, a dive slate was found on a beach south of Cooktown. It contained a handwritten message stating that they had been "abandoned," and pleading for help. The note was dated January 26. Investigators believed it was "more than likely" in Tom Lonergan's writing, but they could not be certain.

That proved to be the "last word"--if last word it truly was--from Tom and Eileen Lonergan. To date, their true fate remains eerily uncertain. Was it a murder-suicide? Double suicide? If Jeanette Brentnall's testimony can be believed, did the couple fake their own deaths in order to start new lives for themselves?

Or was it a case of the simplest, most haunting scenario of all? Did a careless boat captain leave the Lonergans stranded in the middle of the ocean, condemning them to die a lonely and frightening death?
Posted by Undine at 4:40 AM