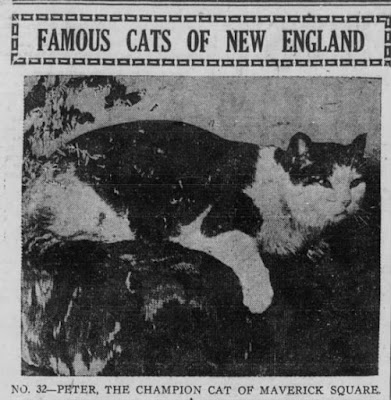 Our latest look at the "Boston Post" series, "Famous Cats of New England" looks at a drugstore champion:


Drugstore cats have not figured on the lists of New England's famous cats, and Peter from East Boston wonders why. Peter is a 14 years old drugstore cat who weighs just 14 pounds. The champion of Maverick square--that's Peter.

Never a stray cat wanders into the Woodbury's Drug Store, where Peter holds sway, that is not forcibly reminded by Peter that the open air is a healthier place for cats and dogs. Peter's throne and place of vantage from which he looks for trouble in the form of such invaders is a stool by the soda fountain.

It's not eating ice cream and candy and such soft dainties that have made Peter so successful in giving the K.O. blows that land outsiders where they belong. Peter eats only once in every 24 hours; then heartily of man's size food--meat and milk and potato.

To folks who come to shop, however, Peter is cordial as any greeter. He has a "welcome home" smirk that would arouse a hotel man's envy. He extends his paw like a dog to shake "howdy" and is a great favorite. Many of the children of the district insist on having their ice cream in Maverick square just so that they can talk to Peter.

"Champ" Safrin, caretaker in chief of Peter, found him one morning with a broken jaw. The cause has never been discovered, but a cure was effected speedily. Peter was rushed off to the Animal Hospital and the veterinary cut a piece from Peter's jaw pulled out two old teeth and by proper plaster casting and later careful massaging Peter was made as good as new.
~January 10, 1921

[Note:  As far as I can tell, Peter was the final "Famous Cat." I can find no more of  this series in the "Post" archives.  Farewell, Famed Felines!]
Posted by Undine at 4:44 AM