A Revolting and Horrible Affair: The West Twenty-Third Street Murder 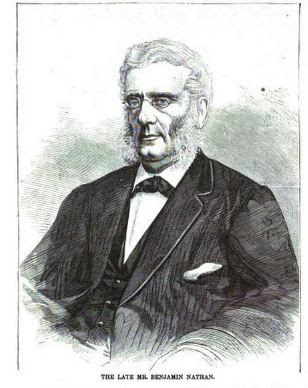 Early on the morning of July 29th, 1870, Major-General Francis Blair awakened in his room in New York City's Fifth Avenue Hotel. Blair had had a distinguished career in the Mexican and Civil Wars, and in 1868, was the Democratic Vice-Presidential candidate. It probably would have galled the Major-General no end if he had known that this blog's sole interest in him is that he was also a principal witness in one of Gotham's most famous unsolved murders.

Blair rose from his bed at about 5:30 a.m. The weather was miserably sticky and hot, so he opened his window in the hope of getting some measure of relief. As he stood by the window, he was just opposite a third-floor bedroom of the house next door. He could see a man in that bedroom, preparing to dress for the day.

It is a relief to learn that the Major-General was not a Peeping Tom. Blair merely closed his window shutters and went back to bed.

All was quiet for half-an-hour, when Blair was reawakened by sudden cries for help. When he looked out the window, he saw standing on the street below the man he had seen earlier, still in his night-clothes. He was now covered in blood. With him was another, younger man who was also only wearing a nightshirt. They were both nearly hysterical, shouting and waving their arms wildly. It did not take long before Blair--and the world--learned the very good reason why Frederick and Washington Nathan were in such a state: Their father, 57-year-old Benjamin Nathan, was lying dead in his bedroom. Someone had savagely beaten him to death. The blood on Frederick's nightclothes came when he cradled his father's body, desperately checking for some sign of life.

Although the Nathan patriarch is only remembered today for his grisly end, at the time he was one of the most well-known men in New York. This vice president of the New York Stock Exchange was immensely wealthy, and widely admired for his philanthropy and highly respectable private life. The large Nathan family--Benjamin and his wife had eight children--were leading members of the Jewish aristocracy. The idea that the head of the family could be brutally murdered in his own home seemed almost inconceivable. The "Police Gazette" spoke for everyone in New York when it moaned, "That a citizen so respected and benevolent as Benjamin Nathan, one who should have had not an enemy in all the world, that he should have had his life-spark extinguished with such shocking brutality made for a revolting and horrible affair."


On the night of the murder, most of the Nathans were at their summer home in New Jersey. The only family members at their main residence were Benjamin, Frederick, and Washington. With them was the housekeeper, Anne Kelly, and her twenty-five year old son William, who acted as a general odd-job man around the house.

Benjamin had only been making an overnight stay in New York, in order to attend to some business. As the house was being redecorated, Mrs. Kelly prepared makeshift quarters for him in a second-floor room. Frederick and Washington told police that they had spent the evening with their father, and then both left the house and went their separate ways. Neither returned home until past midnight. Their father was asleep in his room. The brothers noticed nothing amiss until the morning, when they discovered Benjamin's body. On the floor near the corpse was the murder weapon--an iron bar known as a "carpenter's dog." It was never determined where this "dog" came from.

The motive appeared at first to have been robbery. The room was in complete disarray. A small safe in an adjoining room was open, and an empty cash-box was lying on Nathan's bed. Some minor items were missing. However, an even more sinister theory about the crime soon spread through the city: Gossip had it that Benjamin Nathan was murdered by his 22-year-old son Washington.

It's unclear how or why these vicious rumors began. It is true that Washington was the last person known to have seen his father alive, and he had been the first to discover the body. His habits were notoriously dissipated--it emerged that on the night his father was killed, Washington had been in the company of a prostitute--and his strait-laced father made no secret of his disapproval of such a lifestyle. Benjamin was so disturbed by his son's fondness for drink and disreputable women that he put a clause in his will putting Washington's inheritance in a trust. The young man would have access to the principal only when he made an acceptable marriage or he turned 25. Even then, his mother would have to sign an affidavit affirming that he "was living a life of regularity and sobriety." Still, all this seemed like very flimsy evidence against the Nathan black sheep. Washington had nothing to gain financially from his father's death. In fact, Benjamin had been very generous--arguably too generous--in providing his son with money. Investigators had no difficulty clearing him from suspicion. The rumors continued, however. Parricide was just too juicy a story for the public to give up on it without a fight.

As was the case in the murder of Harvey Burdell, it an odd fact that everyone in or around the Nathan home seemed oblivious that a particularly violent murder taking place near them. A couple who lived next door testified at the inquest that they heard several loud thuds at around 2 a.m., but at the time they did not believe it was of any importance. Other than that, no one reported anything unusual.

The Nathan murder was one of those cases where the investigation suffered from an almost total lack of clues. Benjamin had been on good terms with all his children--even his disagreements with Washington did not damage their mutual affection--and he had no known enemies. The most logical assumption was that he had been beaten to death by a burglar, but who might that have been? The coroner's jury had no choice but to return an open verdict.

Unfortunately, open the verdict has remained. Police were never able to gather enough evidence in the case to even charge anyone with the crime, leaving Benjamin Nathan's murder a classic puzzle. For some years afterward, the newspapers entertained their readers by publishing various dodgy "confessions," crank theories, and sensational rumors about the mystery, but it's safe to say they were all just so much hot air. On slightly more solid ground is the speculation that Anne Kelly's son William had something to do with the murder. He was a shiftless sort who ran in some highly questionable circles. Could he have been an accessory in a burglary that unexpectedly turned to murder? Unfortunately, there is no more hard evidence against him than there is for anyone else in this story. A thirteen-year-old newsboy claimed that shortly after 5 a.m. on the morning after the murder, he saw a man "dressed like a mason" exit the front door of the Nathan home. If the boy really did see this man, and was not just inventing a colorful story to draw attention to himself, the "mason" was never identified. But if it was a burglary, why choose a night when the house was occupied, when it had been empty all that summer? Even if Benjamin had surprised intruders, why did they attack him with such lethal ferocity? And, again, why did no one else in the house see or hear anything?

The closest the case came to being "solved" came when a Sing Sing inmate named George Ellis suddenly declared that he and a Billy Forrester had burglarized the Nathan house. When they unexpectedly encountered Benjamin, Forrester, in a panic, had bludgeoned him to death.

Forrester had been sentenced to a stretch in Joliet for an earlier offense, but escaped from prison. In September 1872, the fugitive was tracked down in Texas and brought to New York for examination. In short, while there was certainly enough about this career criminal to arouse the worst suspicions, the District Attorney was forced to conclude that "the technical facts...would fail in making out a case." Forrester was not charged with the Nathan murder, but merely sent back to Joliet to finish his sentence. This was said to be a great relief to him. As a postscript to this inconclusive footnote to the Nathan mystery, Forrester's attorney broadly hinted that he, at least, felt the case was no mystery at all. "In regard to Forrester," he wrote, "I cannot speak fully without violating professional honor, for the man was a client of my office; but I can say this, that from what I learned of him, Washington Nathan had no more to do with the killing of his father than I."

The enigmatic nature of the crime meant that Washington Nathan never really lived down the dark suspicions raised against him, and he lacked the strength of character to live with such a stigma. He quickly blew through his share of the family fortune on riotous living he no longer seemed to even enjoy. In 1879, Washington again made unenviable headlines when a former lover, incensed at being jilted, shot him in the face.. The bullet, which lodged in his jaw, was never removed. Several years later, he married an opera singer and moved permanently to Europe. In 1892, the once-handsome, pampered playboy died in Boulogne, a sad, white-haired old man of only forty-four. After his death, the "Chicago Tribune" described him as "always alone and unattended and wearing upon his face the expression of a man utterly dissolute." He spoke obsessively of his family tragedy, wailing that "No blood could ever be found on any of my clothes, yet people say that I killed him. My poor father! My poor father!" If, as seems likely, Washington Nathan was indeed innocent of his father's murder, he can be called the secondary victim of the crime.
Posted by Undine at 4:44 AM