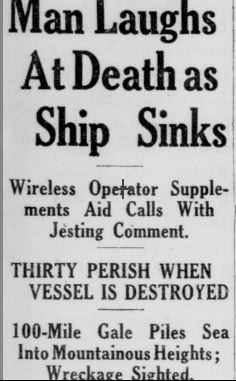 This memorable example of "gallows humor" appeared in the "Sacramento Union," March 9, 1922:


NEW YORK, March 9.—The grim humor of a wireless operator, who laughed at death and flashed striking bits of wit into the ether as his ship, the Norwegian steamer Grontoft, wallowed and slowly sank during a mid-Atlantic hurricane last Thursday, was recorded on the radio log of the Danish steam Estonia, arriving here today. Each detail of the ship’s plight, each call for aid, was supplemented by the jesting comment of the radio man, whose identity is still unknown. He talked as If he were going on a lark in port, instead of to the bottom of the sea. His last message, a disjointed one, was a series of witticisms —with death as the butt of the joke. The Estonia, herself hard hit in the 110-mile gale, made a valiant, but unsuccessful, effort to reach the Grontoft, which first sent out calls for aid at 10 o’clock last Thursday morning, reporting her position as about 700 miles east of Cape Race. The Estonia at that time was 48 miles west of the disabled Norwegian and steaming in an opposite direction. Captain Hans Jorgenson ordered his ship about and she steamed slowly toward the Grontoft, Meanwhile radio Operator Hansen engaged the operator of the Grontoft in conversation. The latter sent out first the following—stereotyped irony of the seas: “God pity the poor sailors on a night like this.” Then followed a series of “Ha, ha,” “and say,” he continued, “the old man thinks this calm will be over by nightfall. We sure need some breeze.”

An hour later an urgent call for aid was sent out by the Grontoft and her operator jested again. “Well, the steward is making sandwiches for the lifeboats. Looks like we are going on a picnic.’’ Again a half hour later he sent: “The old wagon has a list like a rundown heel. This is no weather for a fellow to be out in without an umbrella.” “Hold on,” returned the Estonia’s wireless, “we’ll be alongside soon.” The Grontoft did not reply until 40 minutes later. Then: "We are sinking stern first. The boats are smashed. Can’t hold out any longer. The skipper dictated that—he ought to know —where did I put my hat—sorry we can't wait for you, pressing business elsewhere." The Estonia’s operator quoted in reply these lines: “What dam of lances brought thee forth to jest at dawn with Death?" But there was no answer. Six hours after picking up the first call from the Grontoft, the Estonia reached her reported position, and though she cruised about for four hours, failed to find even a trace of wreckage. The Grontoft, from Galveston, New Orleans and Norfolk, was en route for Esbjerg. She had a crew of thirty.


It was later reported that the operator who "jested at dawn with Death" was a 26-year-old Norwegian named John Frantzen. His fiancee had been waiting in Esbjerg to meet him.

There was another eerie story associated with the ill-fated radio operator. Before its last voyage, the Grontoft crew went to the Norwegian consul in New Orleans to complain about the inedible food in their ship's mess.  As the men were leaving, Frantzen drew a picture of the Grontoft on the walls of the corridor outside the consul's office. Underneath the sketch he wrote, "We wish you a happy voyage to Hell--if not this summer, then next year."

Rest in peace, John Frantzen.  You had style.
Posted by Undine at 4:44 AM