Time to add another case to the Mystery Floods file. This one comes to us via the "Crescent-News," [Defiance, Ohio] for July 9, 1975:


While rain in Spain may fall mainly on the plain, all the precipitation in Ayersville seems to be falling in the Clyde Frederick house.

In? Yes, inside their house. It may be incorrect, however, to refer to the moisture in the Fredrick house as rain since it doesn't really fall. It just appears. Everywhere. All the time.

"It comes in spells," Mrs. Ann Frederick said, with an ever-present towel in her hand. "We might not see any for a couple of hours and then it will look like there's been a shower in the house." The water gives no warning; it makes no sound when it appears. But turn around and there's a puddle on the TV. Or on the shelves. Or in a drawer or in the coal bucket. It's a strange phenomenon, and one that none of the plumbers, Water Works employees or insurance men who have visited the house have been able to explain. Even the National Weather Bureau admitted It has never heard of a case like the one in Ayersville.

The eerie saga began Saturday night when Ann and Clyde Frederick and their children, Julie and Danny, left their home at 9 p.m. to pay a short visit to a friend's house. When they returned at 10 p.m., the kitchen floor was full of water. Puddles have been relentlessly appearing ever since.

"It's hard to catch it forming, which only makes it more mysterious," Mrs. Frederick said. It happens when you're not looking at a certain place. We only saw it form once--we could see the carpet get wet in a ring."

"It makes you nervous," she said. "It's worse because no one can tell us what's causing it." 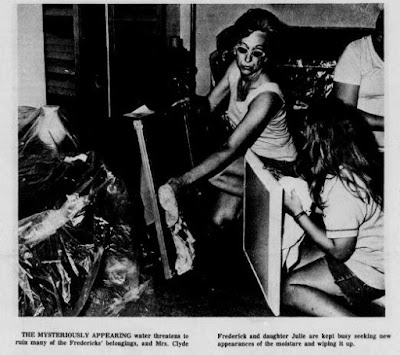 "It really is spooky," said Harold Root, office manager of the Defiance City Water Department, who visited the Fredericks Monday. "I don't know why it's happening, but it has to have something to do with condensation," he said." It shows up on flat surfaces, which is characteristic of condensation, but it really has appeared in large amounts."

Root saw the water appear with his own eyes. "I saw a few drops of water on the carpet, and then a circle about the size of a half-dollar appeared. I thought it was coming up through the floor, but we lifted up the rug, and the pad underneath was completely dry."

Root is checking out a few of his own theories on how the water appears, but the fact that the walls and ceiling of the house are dry has destroyed most of his ideas, he said. The National Weather Bureau in Columbus agreed that the problem must be an unusual form of condensation, but admitted, when the circumstances were described to them over the phone by the Crescent-News, that they had never heard of anything like it before.

Neighbors helping mop up water and move belongings around kiddingly compare it to the strange occurrence in "The Exorcist" film which played in Defiance only two weeks ago. Right now they are kidding. But the story admittedly smacks of the "Twilight Zone." In fact, one would be inclined to think it was all an elaborate hoax if the Frederick house was not in such obvious disarray and the family and friends so worried.

Disarray is perhaps not a strong enough word. The house has been turned upside-down in an effort to locate the ever-appearing water before it soaks in and ruins things. Sheets of clear plastic cover the sofa, chairs, and piano in the living room, as well as the TV and similar furniture in the family room. Pictures have been removed from the walls. All the drawers in the kitchen and bedrooms are pulled out or have been removed.

"We pour water out of the drawers and wring it out of the clothes inside," Mrs. Frederick said. The living room drapes lay in the garage, where water has yet to form, drying out after the Fredericks discovered water running down them Monday morning. Many items that are easily water-damaged have been moved to the garage or the attic, another place which has remained bone-dry. Hopefully it will remain so. But no water had appeared in the closet under the stairs until Monday. Meanwhile, the house is dotted with piles of damp towels, sheets and clothes, "anything we could soak up water with," Mrs. Frederick said. "Sunday night we had 12 washer loads full of towels and sheets," she said.

Neighbors have been a big help. They and relatives have been lending moral support and helping mop up since the weekend. They have also provided extra towels as well as dehumidifiers and fans which Mr. Frederick hopes will help alleviate the problem. "We have three dehumidifiers going now and are expecting a fourth from a neighbor," he said. "We also have four fans. I don't know whether it's helping or not since water is still appearing. But we have to do something."

The house, however, feels no more humid to the average person than any other house on a 90-degres summer day. Something has to be done soon, everyone says. No serious damage has been done yet, if the felt keys on the piano dry out. But the Fredericks have paid the price of getting up every hour during the night to look for water and wipe up any that appears. Their insurance firm, Bacherman of Napoleon, has indicated that it won't pay off on any damage caused by the water, Frederick said. "If it was vandalism or a water pipe broke; it would be covered, they said, but this won't," Frederick lamented. "They said that they don't know what's causing it and we can't prove where it's coming from, so the claim isn't good."

The piano is drying out, and they hope the wooden drawers and cupboards will do the same. The TV picture is blurry now, but Frederick isn't sure if that is due to the water, or if it is merely a coincidence. News about the mysteriously appearing water is spreading fast. Weatherman Earl Finkle of WOWO radio station in Fort Wayne, Ind., has contacted the Fredericks about it, and Mrs. Frederick said Finkle had been contacted for information concerning the phenomenon by the Chicago Weather Bureau. Maybe the experts will be able to explain why the Fredericks have water on their record albums. And on the headboards in the bedrooms. And in the fireplace. In the meantime, the Fredericks, their friends, and their relatives will keep mopping up.

Follow-up reports stated that the water stopped on July 14 as abruptly as it started, and, as far as I can tell, the Fredericks were left permanently high and dry.  It does not appear that any answer was ever found to the mystery.
Posted by Undine at 4:46 AM