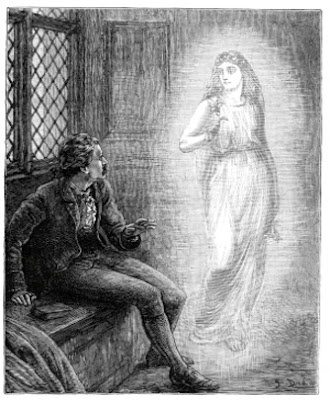 Most of my favorite ghost stories deal with wronged spirits getting a bit of their own back. A perfect example is this short-and-anything-but-sweet story told by that famed 17th century gossip John Aubrey in his "Miscellanies Upon Various Subjects."


Sir John Burroughes being sent envoy to the Emperor by King Charles I. did take his eldest son Caisho Burroughes along with him, and taking his journey through Italy, left his son at Florence, to learn the language; where he having an intrigue with a beautiful courtesan (mistress of the Grand Duke), their familiarity became so public, that it came to the Duke's ear, who took a resolution to have him murdered; but Caisho having had timely notice of the Duke's design, by some of the English there, immediately left the city without acquainting his mistress with it, and came to England; whereupon the Duke being disappointed of his revenge, fell upon his mistress in most reproachful language; she on the other side, resenting the sudden departure of her gallant, of whom she was most passionately enamoured, killed herself.

At the same moment that she expired, she did appear to Caisho, at his lodgings in London; Colonel Remes [a Parliament man, and did belong to the wardrobe, tempore Caroli II] was then in bed with him, who saw her as well as he; giving him an account of her resentments of his ingratitude to her, in leaving her so suddenly, and exposing her to the fury of the Duke, not omitting her own tragical exit, adding withal, that he should be slain in a duel, which accordingly happened; and thus she appeared to him frequently, even when his younger brother (who afterwards was Sir John) was in bed with him. As often as she did appear, he would cry out with great shrieking, and trembling of his body, as anguish of mind, saying, O God! here she comes, she comes, and at this rate she appeared till he was killed; she appeared to him the morning before he was killed. Some of my acquaintance have told me, that he was one of the most beautiful men in England, and very valiant, but proud and blood-thirsty.

This story was so common, that King Charles I sent for Caisho Burroughes's father, whom he examined as to the truth of the matter; who did (together with Colonel Bemes) aver the matter of fact to be true, so that the King thought it worth his while to send to Florence, to enquire at what time this unhappy lady killed herself; it was found to be the same minute that she first appeared to Caisho, being in bed with Colonel Remes. This relation I had from my worthy friend Mr. Monson, who had it from Sir John's own mouth, brother of Caisho; he had also the same account from his own father, who was intimately acquainted with old Sir John Burroughes and both his sons, and says, as often as Caisho related this, he wept bitterly.