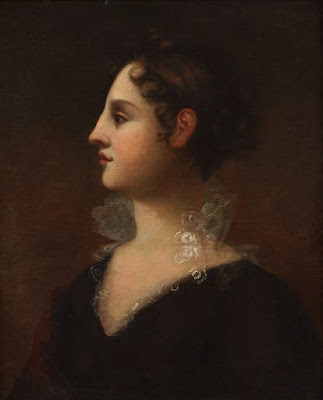 Even if Theodosia Burr had not been the daughter of one of America's most prominent--and notorious--political figures, she would still have been worthy of note. This only surviving child of Aaron Burr and Theodosia Prevost was born on June 21, 1783. Her parents doted on the girl, convinced that she was someone exceptional. Of course, all decent parents feel the same about their children, but young Theodosia was exceptional. From an early age, she showed unusual intelligence and a desire to learn--qualities that her father, who believed women should be as well-educated as men, vigorously encouraged. When Theodosia was still a child, Burr wrote, "I yet hope, by her, to convince the world what neither sex appear to believe--that women have souls!" Theodosia grew up to be not just remarkably erudite, but precociously cultured and sophisticated. The beautiful girl showed a talent for music, languages (she was fluent in French, German, and Greek,) horsemanship, and dancing, and displayed a quick wit and great social charm. A visitor praised her as "elegant without ostentation, and learned without pedantry." Unsurprisingly, Theodosia developed into a confident, strong-willed woman who believed she was more than a match for any man.

Burr adored his jewel of a daughter, and she fully returned this worship, describing her father as "so superior, so elevated above all other men." After Theodosia's mother died in 1794, the profound bond between father and daughter became even closer. The girl became "the woman of the house," managing the household and acting as hostess with an efficiency and polish that would have done credit to someone twice her age. Theodosia was not just Aaron Burr's child, she was his closest companion and most trusted adviser. "For what else, for whom else, do I live?" he once wrote her.

Considering how unusually close Theodosia was to her father, it is a bit surprising that another man managed to win her affections. In February 1801, when she was only seventeen, Theodosia married a wealthy South Carolinian named Joseph Alston, and the young couple went to live on his extensive rice plantation. Alston entered politics, with such success that by 1812 he was South Carolina's governor. Although Burr gave his blessing to the marriage, he was naturally distressed at the thought of losing Theodosia's company.

Although Theodosia and Alston remained devoted to each other, the marriage cannot be called an entirely happy one. Theodosia was not cut out for the dull routine of an isolated plantation. She was deeply homesick for the urban excitement of New York, and missed Burr as much as he yearned for her. In 1802, Theodosia gave birth to a son, whom she named after her beloved father. Unfortunately, the birth had been a very difficult one. It left Theodosia with a prolapsed uterus that caused lingering pain and likely made physical relations with her husband impossible. Her health never recovered.

Meanwhile, without Theodosia at his side, Burr seemed utterly lost. In 1804 came his infamous duel with Alexander Hamilton (a duel sparked, according to some rumors, by Hamilton's unpleasant insinuations about the nature of Burr's relationship with his daughter.) After that came the series of curious and still somewhat murky intrigues that in 1807 led to Burr being charged with treason.

Through all these vicissitudes, Theodosia provided Burr with unwavering moral support, and remained with him throughout his trial and acquittal. Despite the fact that her father was now a free man, she was deeply saddened to realize they both were now social outcasts. "The world begins to cool terribly around me," she wrote. Her Alston in-laws had turned against her, and it was said that even her husband regretted being linked by marriage with the most hated man in the country, and resented his wife's steadfast loyalty to Burr. Theodosia's health continued to deteriorate. She suffered from what she described as "hysteric fits," hallucinations, and severe depression.

In June 1812, Theodosia suffered a further blow when her son suddenly died of malaria. "There is no more joy for me," she wrote. "The world is blank. I have lost my boy." The lonely, grieving woman longed for her father more than ever. On December 30, 1812, she boarded the pilot ship "Patriot," bound for New York. She and Burr had not seen each other for four years, and were greatly looking forward to their reunion.

Instead, no one ever saw Theodosia again. A few days after the "Patriot" set sail, it completely and mysteriously disappeared, presumably somewhere off Cape Hatteras, North Carolina. No confirmed traces of the ship or its passengers and crew were ever found.

No one knows for certain what became of Theodosia Burr Alston, but not for lack of trying. The vanishing of such a notable and romantic figure--so gifted in some ways, so cursed in others--gave birth to an unusually rich panoply of legends and rumors centered around her "true fate."

The most popular theory is that the "Patriot" was captured by pirates, with everyone on board the ship being murdered. (A variation of this scenario is that the ship fell victim to Carolina "wreckers" who lured the "Patriot" onto the shoals.) Nineteenth-century newspapers were crammed full of "deathbed confessions" from various elderly ex-pirates describing how they had forced Theodosia Burr--who was invariably described as showing heroic courage and stoicism--to "walk the plank." Possible confirmation for this tale was given in 1910 by one J.A. Elliott, who revealed a family tradition that in early 1813, one of his ancestors found the body of a beautiful and expensively-dressed woman washed ashore at Cape Charles. Elliott stated the woman was buried on his uncle's farm.

A variation of the pirate legend describes how one of the buccaneers, infatuated with Theodosia's beauty and grace, kidnapped Mrs. Alston and imprisoned her on a remote island. However, the valiant woman preferred death to the living hell of being a pirate's chattel. She managed to escape her captors long enough to drown herself in the sea. Her ghost, it is said, still haunts the beach where she perished. More prosaically, some have suggested that the "Patriot" became accidentally involved in naval action related to the War of 1812. Could the vessel have been mistaken for a military ship and sunk by the British? As I mentioned on an earlier post, there is even a surprisingly persistent belief that Theodosia was the mysterious "Female Stranger" buried in Alexandria, Virginia. Or was she living in Texas as the wife of an Indian? As a pirate's mistress in Bermuda? There is also the narrative that a Karankawa Indian chief possessed a gold locket engraved with the name "Theodosia." According to this bit of folklore, the chief had once saved a woman from a shipwreck. She told him she was the daughter of "a great chief of the white men," who was unfairly forced to leave his country. Before dying, she presented him with this locket.

And then there is what has become known as the "Nag's Head Portrait." In 1869, a doctor named William Gaskins Pool was called in to treat an elderly woman named Polly Manncaring, who lived in a dilapidated old shack near Nag's Head, North Carolina. While Dr. Pool was there, he was struck by an oil painting he saw on the wall. It was of an elegant dark-haired woman in her twenties. The beautiful image seemed oddly out-of-place in the dark, dismal hut. The old woman told him that around the time of the War of 1812, her husband had been among the "wreckers" who boarded a pilot boat that was beached near Kitty Hawk. The ship appeared to have been abandoned and cast adrift. There was no sign of blood or other marks of violence. The cabin was strewn with expensive clothing belonging to a woman, as well as other valuable articles, including this portrait. As payment for the doctor's services, the woman gave him this picture. Pool was convinced that it was a portrait of Theodosia Burr, and that the boat discovered by the "wreckers" was the lost "Patriot." Some members of the Burr and Alston families agreed with him. However, Joseph Alston's sister-in-law--the only person to inspect the painting who had known the living Theodosia--saw no resemblance.

In contrast to all these efforts to weave colorful dramas around the fate of Theodosia, the person who knew and loved her best had a starkly simple explanation. Aaron Burr was certain his beloved "Theo" had drowned when a fierce storm that was known to be in the area sunk her boat, and she now rested somewhere on the bottom of the sea. "Were she alive," he said, "all the prisons in the world could not keep her from her father."

Burr was most likely correct. Scholars who have studied the path of this storm believe that the "Patriot" would have unwittingly sailed straight into it. Archaeologist James Mitchie concluded that the little pilot boat "faced near hurricane-force winds" that it could not possibly have survived. Mitchie believed it sank sometime between 6 p.m. on January 2 and 8 a.m. on the 3rd.

Theodosia's last moments were certainly tragic, but probably not very mysterious.
Posted by Undine at 4:46 AM