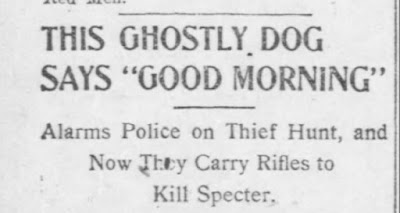 
Pittsburg, July 30--Policemen, armed with repeating rifles, are patrolling Lincoln avenue nightly, seeking to get a shot at a supernatural dog which talks good English, then disappears in the vapors of the night.

Many petty robberies have been committed in the neighborhood of Lincoln avenue recently.

Detectives Charles Aymer, Arthur Ehrenfield, and Lieut. Charles G. Shields were detailed to catch the thieves. Sunday morning at dawn the three men descended a ravine back of the home of the Sisters of Divine Providence.

A big black figure followed them. They moved across a bridge and the black phantom waddled on behind. The three men say it was a large Newfoundland dog. The policemen halted; the dog stopped. Suddenly the brute spoke in deep tones, "Good morning." The men quailed in fear. "Good morning," said the dog.

The dog disappeared in thin, greenish vapors. The men made a search of the ravine, but no dog tracks could be found. They were laughed at when they told their story.

It just occurred to me that this is the second talking ghost dog I've featured on my blog, which reassures me that I must be doing something right.
Posted by Undine at 4:37 AM