The Case of the Vanishing Lieutenant 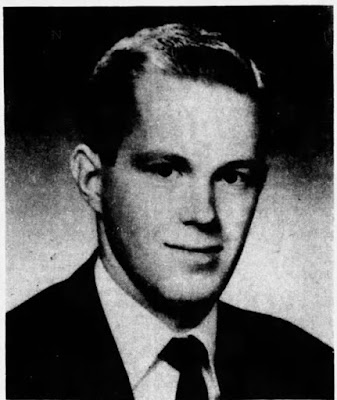 To paraphrase Gilbert & Sullivan, Paul Byron Whipkey was the very model of a modern Army First Lieutenant. The 26-year-old was smart, brave, serious and disciplined, described as "an all-American young man and a superior officer." He was, in short, one of the last people you could imagine being enveloped by The Weird.

However, since he is featured on this blog, you have probably already guessed that this is exactly what happened.

The young aviator and company commander was stationed at Fort Ord, California. On July 10, 1958, he told some friends at Fort Ord's bachelor officers quarters that he was going into town to "get a drink." Instead, he drove to Mojave, hundreds of miles away, and checked into a motel. The next day, he bought 14 gallons of gas.

After that, the Lieutenant was never heard from again. Five weeks after he was last seen, Whipkey's car was found in "a desolate and forbidding region" of Death Valley, about 400 miles from Fort Ord. The car appeared to be in perfect order, containing the missing man's suitcase, dog tags, and other personal belongings. There was nothing indicating what might have happened to the car's owner. Whipkey's bank accounts had not been touched immediately before he disappeared, and they had not been used since.

The Army listed Whipkey as "absent without leave," and then as a deserter. His superiors seemed curiously incurious about what had become of this highly promising young man. According to the FBI, the Army made only the most cursory investigation about Whipkey's disappearance, assuming that "he would eventually return."

There matters rested until the spring of 1982, when the Army Board for Correction of Military Records held a three-day hearing into Whipkey's disappearance. The board concluded that Whipkey died the day after he vanished. They added enigmatically that "his unauthorized absence...(is) excused as unavoidable...that his death was incurred in the line of duty, not due to his own misconduct." The board theorized that Whipkey "may have wandered out into the desert...and succumbed in the extreme heat; and that the shifting sands have made it a near impossibility to find, or recover, his remains." The Army Adjutant General's office issued a certificate of honorable service, and, as far as the Army was concerned, that was that. The military offered no possible explanation for Whipkey's "unauthorized absence."

All this was not nearly enough for Whipkey's brother Carl. An Army veteran himself, he was convinced from the start that the military knew far more about Paul's disappearance than they wanted to say. His suspicions were first alerted when, just the day after his brother vanished, he learned that officers were already packing Paul's belongings for shipment home. This odd haste, he commented dryly, left him "superhyper superquick." "They must have known he wasn't coming back," Carl argued, "or they'd have waited before writing him off." Carl also dismissed the Army's contention that Paul had deserted. "They said he ran away into Death Valley, then they hinted that he killed himself. I can't buy that. Nobody would go AWOL in a hellhole like Death Valley, and there are easier ways to kill oneself than dehydration." Carl was of the belief that members of the Army drove Paul's car into the desert some time after the lieutenant disappeared.

"The government knows what happened to my brother," Carl said in a 1983 interview. "They can't shake me of that. There are so many questions still unanswered." 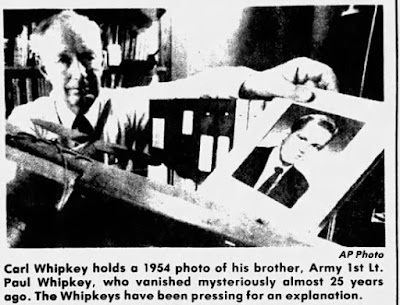 Carl Whipkey made it his "life's work" to find the truth about his brother's end. In June 1977 Carl sought information from the FBI under a FOIA request. His petition went unanswered until 1978, when he was informed that the FBI had destroyed all their files on the Whipkey case in December 1977.

Undaunted, Carl accumulated thousands of government documents, as well as many sympathetic allies in Congress and the military, but all these efforts just left him going down darker and darker rabbit holes.

Carl claimed to have discovered that Paul flew in five atomic test explosions in Nevada. His theory was that Paul was exposed to dangerous levels of radiation, and may have seen evidence that the Army was conducting classified experiments on human beings. Although the Army confirmed that Lt. Whipkey was assigned to temporary duty at Camp Desert Rock, Nevada between July and October 1957, they dismissed Carl's other claims as unsupported by the evidence.

However, even the Army report acknowledged that after Paul returned from Nevada, he developed black moles and plantar warts on his hands and body. Whipkey began to complain of unaccountable feelings of sickness. He lost a large amount of weight, and the normally cool-headed officer became nervous and depressed. Several months before he disappeared, the Lieutenant had all his teeth removed, and was fitted with full dentures. A fellow officer, Charles Lewis, recalled that after Whipkey's Nevada flights, Paul was interviewed by Army intelligence agents. It was noted that these interviews left Whipkey "nervous and uptight." "Paul's actions were always ethical on and off the base," said Lewis. "But Paul became suspiciously silent to others when the agents were mentioned or appeared on the scene at the airfield or the officer's club."

Carl Whipkey developed even more sinister theories regarding his brother's disappearance. He believed it possible that Paul was a secret agent murdered by his fellow spies. Or that he flew covert missions over the Soviet Union, only to be shot down. Or that he died as a result of Army testing of nerve gas or atomic weapons. Or that his discovery of the military's use of human guinea pigs led him to be murdered. Just to make things even stranger, Carl also learned that his brother may have used the alias "Paul B. Whipper," for reasons unknown. "I would be satisfied even if the Army would say they can't tell us for security reasons. But until then, we can't rule anything out."

The truth about Paul Whipkey's fate probably cannot be called "unsolved." Carl Whipkey was very likely correct that someone somewhere knew the truth about what had happened to the young lieutenant. However, to date, this information has never been revealed. Until that day comes, Carl Whipkey once said, "there will be no peace in our family."

[Note: There are certain resemblances between the Whipkey case and the bizarre disappearance of another young Cold War-era man, West Point cadet Richard Cox.]
Posted by Undine at 4:47 AM