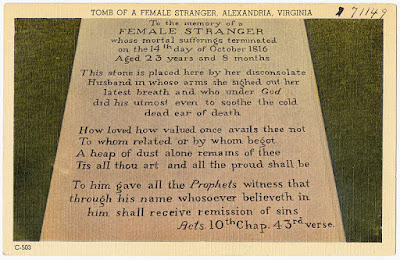 One of American history’s most romantic mysteries centers around a grave found in St. Paul’s churchyard in Alexandria, VA. The gravestone's epitaph reads:

TO THE MEMORY
OF A
FEMALE STRANGER
Whose mortal sufferings terminated
on the 14th day of October, 1816
Aged 23 years and 8 months

This stone is erected by her disconsolate husband
in whose arms she breathed out her last sigh, and
who, under God, did his utmost to soothe the cold,
dull ear of death.

How loved, how honored once, avails thee not,
To whom related, or by whom begot;
A heap of dust alone remains of thee—
‘Tis all thou art and all the proud shall be.

“To whom gave all the prophets witness, that through His name, whosoever believeth on Him shall receive remission of sins.”
-Acts, 10th, 43rd verse


Trying to discover the true story behind this enigmatic epitaph—let alone the identity of the “stranger”--is enough to give any historical detective the vapors, as accounts of this young woman’s stay in Alexandria show a wearying lack of consistency. All that can be said with reasonable certainty is that sometime either in the summer or the fall of 1816, a young woman and a man who identified himself as her husband arrived in the busy port city. She was (depending on whose story you believe,) either already ill, fell ill soon after her arrival, or she delivered a child sometime after reaching Alexandria, only to die of complications from childbirth. Some accounts state she remained heavily veiled until her death, others that her exceedingly beautiful face was visible. All stories agree that the couple insisted on keeping themselves anonymous.

After the woman died, some accounts say the husband ordered a monument, with the inscription quoted above, and disappeared. Or was it that he left town indigent, leaving a trail of debts behind him, and the townspeople, out of the goodness of their hearts, gave the mystery woman a tombstone? Some say he continued to visit the grave every year on the anniversary of her death for about a dozen years. Others claim he was never seen again.

One tale has it that the mystery woman’s grave gradually deteriorated from neglect, until some years later, when an elderly, gentlemanly-looking man and two equally aged women suddenly appeared and ordered the sexton of the churchyard to see that her burial place was properly attended to. Under his questioning, the trio finally admitted they were related to the dead woman, and that her husband had been a British officer. Then they fled. Is this story true? Who knows? Unexplained oddities such as the grave of the Female Stranger tend to sprout myths-related-as-fact the way an untended yard grows weeds.

This is all we have to work with. Who was this woman, and why was her identity so earnestly protected?

The most popular local legend is that she was Aaron Burr’s daughter Theodosia, who was lost at sea early in 1813. Presumably, the man was either her husband Joseph Alston (never mind that Alston died in September 1816,) or some pirate who had rescued her and subsequently become enamored of the young lady. As oft-told as the story is—and it is only one of dozens of wild theories regarding the “true fate” of Theodosia Burr—its many manifest improbabilities forbid one from taking the idea seriously. Some speculate they were an eloping couple, of such high birth as to make it imperative to keep their names hidden. Or that they were a pirate and his lady fair. Or Napoleon Bonaparte in disguise! One can choose between any number of different tales. Naturally, it is also said that "Gadsby's Tavern," the reputed site of this woman's death, is still haunted by her nameless spirit.

My favorite solution to the mystery appeared in the “New Orleans Crescent” in 1848. The writer of the article claimed to have been in Alexandria at the time of the mystery couple’s sojourn. He asserted that the man calling himself the woman’s husband (the legality of their union was seen as highly dubious) was a con artist named Clermont who executed various swindles and ran up a staggering amount of bills. After the lady’s death, Clermont “vamoosed,” without paying any of his debts, and was last heard from doing a stretch in a New York prison for forgery.

I have my doubts if this tale is any more accurate than the others, but a blogger can dream, can’t she?

In any case, it is difficult to even guess why this couple would be so anxious to stay anonymous—even into the grave—but I have the sneaking suspicion that if we knew the answer, it would be something quite distressingly uninteresting.

History has a way of playing jokes on us all.
Posted by Undine at 4:42 AM