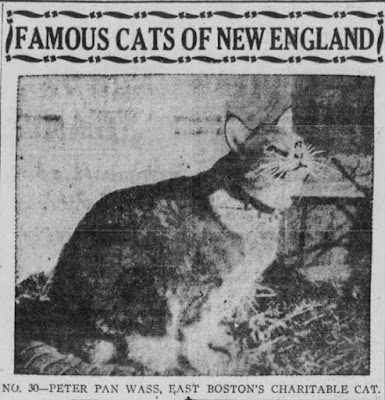 This installment of the "Boston Post's" "Famous Cats of New England" pays tribute to a feline who refuted the popular notion that cats are selfish creatures:

Peter has a purse. Some admirer gave it to him. This purse Peter carries about in his mouth very often when in the house. Callers upon his mistress bestow pennies for Peter's purse; therefore Peter through his own effort is able to contribute his pence for whatever interests him.
~January 7, 1921


All went well until the day it dawned on Peter that charity begins at home. He scooped up his store of donations, booked a flight to the Caribbean, and was last heard of on a beach in Aruba, drinking beer, smoking a fat cigar, and surrounded by beautiful, scantily-clad admirers.

Sorry to have to be the one to tell you that.
Posted by Undine at 4:43 AM