Winter has been here for one month now.

And this is the current mood here at Strange Company HQ. 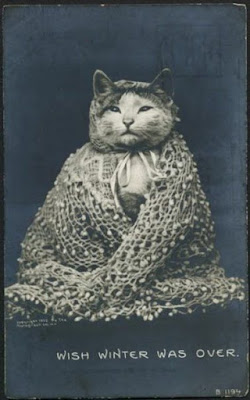 A professor has an interesting side job.

Exploring the possibility that John Keats was a grave-robber.

This week in Russian Weird looks at a vampire Baroness and her cursed tomb.

In which we are confronted with way too much piano playing.

The latest discoveries in the "Siberian Valley of the Kings."

The real Lord of the Flies.  Gah. I hated that book.

It probably won't surprise you to hear that Napoleon was a workaholic.

Unicorns may once have been real.

A visit to a 19th century dissection room.

(Possible) drinking straws from 5,500 years ago.

A brief history of the gruesome Hand of Glory.

A look at early American prisons.

The fashions of 200 years ago.

The return of the literary hatchet-job.

This is probably the ultimate Crazy Cat Lady story.

My grandmother was a fatalist (considering what a hard life she had, that's not surprising.)  One of her favorite sayings was "If it's your time, it's your time."  These stories seem to suggest she was right.

The emotional toll of air combat.

A Japanese captain who had no quit in him.  To say the least.

The posthumous career of Elmer McCurdy.  (Fun fact: I used to date a guy who was a distant relative of McCurdy's.  He was very proud of it, too.)

Human fossils which are even older than we had thought.

A reminder of the horrors of 18th century medicine.

The code of the pirates.

A case of amnesia.

The philosophy of uselessness.

Female spies during the American Revolution.

If you've longed to know about Oliver Cromwell's love life, have I got the post for you.

The famous soup that may never have really existed.

The latest on the Antikythera Mechanism.

The Ape Man of Kent.

The origins of "cut to the chase."

The latest proof that people are jerks.

The writings of anchoress Julian of Norwich.

That wraps it up for this week!  See you on Monday, when we'll look at a Chicago man's puzzling death.  In the meantime, here's a bit of English folk music.